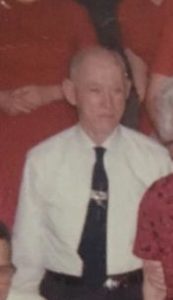 heber charles hicks, state and national securities commissioner, editor, missionary and member of the Sugar House Chapter of the Sons of Utah Pioneers, was born in Salt Lake City Oct. 20, 1880.  He was the son of John T. R. Hicks who migrated from Falmouth, England in 1856 and was the first shoemaker to reach the Valley.  His mother was Anna Buhler, daughter of Ulrich Buhler, one of the first converts in Switzerland. She came across the plains with a handcart company in 1866.  They were married in the Endowment House in 1868.

The entire Buhler family arrived in 1870 and in 1871 his father married his wife’s sister, Susannah, and built her a home on a farm in South Cottonwood.

In 1882 he built another home on the farm and moved Anna and her children into it.  In September 1889 Heber’s father was convicted on a charge of polygamy and sent to the penitentiary where he contracted a kidney ailment and died December 16, 1890.  At the time of his death there were 13 children in the two families.  In June 1896 Heber graduated from the public school and received a scholarship to the University. Later he attended law school and the Latter-day Saints University.

In January 1905 he was employed by the deseret news and in 1907 he was appointed editor of the Provo Inquirer, at that time the largest newspaper south of Salt Lake City.  Two years later he and his brother, Nephi, purchased the paper and organized the Provo Post.

In 1909 four of the teachers at B.Y.U attempted to introduce evolution in the school in opposition to Church doctrine.  The paper supported the Church and Heber made frequent calls to President Joseph F. Smith’s office for instructions.

The trouble ended when three of the teachers resigned.

On the first of April 1921 he was appointed secretary of the State Securities Commission and in the station and nationally.

As business began to boom, hundreds of companies filed applications for the sale of securities for many millions of dollars.  Regulations governing sales had to be formulated to protect the buyers.  A national association of securities commissioners was organized.  Utah became a member with 42 other states.  In 1926 Hicks was elected president of the association and was confronted with the problem of national regulation of investment trusts, first mortgage real estate bonds and stock exchange (only the New York Stock Exchange was exempt).  He appointed committees and all were brought under national trading regulations.

In 1930 he was called back to New York by the attorney general’s office and reorganized the New York Mining Exchange.

He returned home in 1931. He was in his office Sept. 15, 1931 when President David O. McKay
called him on the phone and told him to be at President Heber J. Grant’s office next morning September 16.

Heber was there when President Grant arrived.  He smiled and said, “Heber we are calling you to teach the Indians how to work and become self-supporting.  Be there October 13 to take over.’’  Heber and his wife, Flora, were at the Papago Ward Chapel at 9 a.m. Sunday and took over.

The chapel was a wreck and the home was almost a total loss.  The records had the membership at about 125 members but only 16 Indians were present.

In two years the chapel had been rebuilt and a new home built and a citrus grove was planted and 18 date palms lined the driveway.

A farming program was set up and approved by the presiding bishopric.  The land of the aged and indigents was leased and the able bodied men and women were put to work and a payday came every Friday.

In 14 years Bishop Hicks was responsible for the 3360 acres being brought under cultivation.  During that period the Church membership increased to 530 members.

At the age of 69 Heber went to Washington and began a new career.