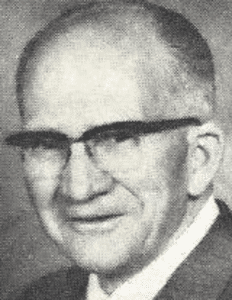 Joseph Kerr Haslam, 86, a member of the temple fork chapter of sup, died November 26, 1989. He was a farmer in Lewiston, Utah from 1915 to 1951 when he moved to Logan and worked for the Utah State University. After his retirement he worked part time for the Bullen Farm Equipment Co. Active in the LDS Church, he served in three bishoprics and was an officiator in the Logan Temple. In 1976-77 the National SUP honored him and his wife by naming them as the year’s outstanding couple. He is survived by his widow, 4 sons, 1 daughter, 25 grandchildren and 44 great-grandchildren.

Brigham Young: One of the Greatest Prophets
Categories: Chapter Eternal
Tagged: Temple Fork Chapter
Derek Rowley
Derek is Program Director for SUP Online; formerly on the Board of the Cotton Mission Chapter, and past president of the Dixie Encampment Chapter. He and his wife, Genine, have lived in the Bloomington Ranches area of St. George, Utah, since moving there from Carson City, Nevada in 2004. Derek also hosts and produces the Hearts of the Fathers Podcast.