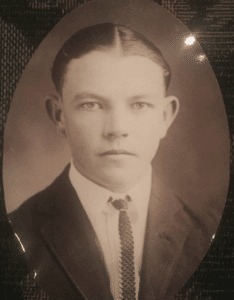 In 1964 he served as first vice president, in 1965 as president and he had served many times on the board of directors for the Cedar City Chapter.

His latest position was second vice president in 1970, His able leadership has led the Cedar City Chapter on many interesting and enjoyable treks.

He enjoyed studying the history of Southern Utah. The sharing of his great knowledge of the area made the treks and outings of the chapter more enjoyable.

An active L.D.S. Church man he was a member of the Cedar Stake High Council at the time of his death. He had also served as Adult Aaronic priesthood leader in his ward, as well as doing and teaching genealogy. He had been an active member of the State and National Cattlemen’s Assn. He had been engaged in livestock and ranching business for many years.

H. Karl Harrison was born Sept. 20, 1904 in Pinto, Washington County, Utah, a son of Heber E. and Lettie Mae Nelson Harrison who were early settlers to Southern Utah. He received his schooling in St. George, Utah.

On Sept. 18, 1934, in the Salt Lake L.D.S. Temple, he married LaVaun Benson of Salt Lake City. To them were born three children, who along with his widow survive him: Byron of Richfield; Grant of Orem, and Mrs. Carla H. Mitchell of Cedar City, Utah.

Funeral services were held in the Fourth Ward Chapel in Cedar City on Jan. 9, 1971 and burial was in the Cedar City Cemetery.