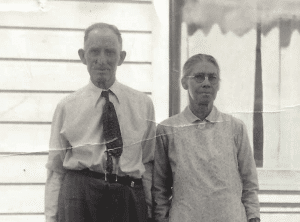 My grandfather, Harrison Davenport Maughan was born in Wellsville, Cache County, Utah on 17 September 1861, the fourth of thirteen children in the family. Brothers and sisters were evenly balanced, six of each. His patriarchal blessing identified him as “a mixture of Ephraim and Manasseh.” When he was only two years old, he went with his parents to settle briefly with the colonizers of Paris, Idaho, on Bear Lake. When Harrison’s little brother, William, died his family moved back to Richmond, Utah for a year and then joined six other families to settle the new town of Weston, in northern Cache Valley.

Harrison spent his next fifty-five years in Weston or up the road in Preston. As a young man, he developed a pleasant, easy-going nature and a strong testimony of the restored gospel of Jesus Christ. One grandchild, Ruth (George Harrison’s daughter), described him as very handsome, of medium height, well built, with sandy-reddish hair and eyebrows and a mustache, sparkling eyes and a ready smile. Ruth said, “He was a bit of a tease in the nicest sort of way, and told wonderful stories. . . I’ve always thought he probably enjoyed his slightly more vagabond life.”

A glimpse into Harrison’s personality is seen in a brief narrative he wrote about his father’s farm in Weston, quoted in the Peter Maughan Family History, page 69:

“What a delight it was to go down to ‘the old ranch!’ There was good fishing in the river, and duck hunting on the sloughs in the fall. Just to ride over the broad, level fields, or to work in the haying, to ‘tromp’ hay and play in the big barn was a real vacation and a boy’s delight. To sit by the cold spring in the hillside between the barn and the house and drink of its refreshing water and to eat the crisp watercress are delightful memories. We stood the buckets of milk and jars of butter in that spring to keep them cold in summer.”

Harrison served in a bishopric. At age fifty-four, he left his family to serve a two-year mission to the Eastern States, from October 1915 until September 1917. In his later years, he was a dedicated temple worker in Logan. He died there on 21 Mar 1939.

Harrison and his wife, Mary Freestone, were very different. Harrison had little formal education and was satisfied with that situation. His wife, Mary, had little formal education, but was intensely anxious for more, for herself and for her children. Harrison was surrounded as he grew up with many siblings and other relatives and enjoyed church and community activities. Mary hungered for more social interaction, as she lived almost alone for years with her father and stepmother, far from society. Harrison was a farmer by necessity, but preferred to work with his father, John, on the construction of canals and railroads. He apparently had a speculative gene in his system and was always anxious to acquire more land or engage in some likely new enterprise. In this, his conservative wife, Mary, kept him in check. Though he was kind and thoughtful of his family, he was away from home a lot, leaving his wife and boys to care for the farm and livestock.

Mary Elizabeth Freestone was born in Alpine, Utah County, Utah on 24 August 1864, the second of four daughters of George and Alice Carlisle Freestone. The other three daughters were Alice, Rhoda and Drucilla. Their mother, Alice, died shortly after Drucilla’s birth in 1868, from a too-common malady following a birth, a staph infection.

Four years later, after his second marriage to Jenny Lind, George and his new seventeen year old bride, the bride’s mother, and Mary Elizabeth (now eight years old) moved from Alpine to Franklin Meadows near where Preston, Idaho was later built. But at that time it was populated only by Indians and a few scattered families. Most who left memoirs agree that, of the seven children, only Mary lived there during these years. Apparently all the others stayed with relatives in Alpine.

Much later, Mary told Elsie how terribly lonesome she had been for her mother. She cried and mourned alone outside by the haystack. She was very frightened of the Indians who inhabited the area. She remembered, as a little girl, joining in the hard farm work, and helping her father with winter-time chores, feeding the livestock while wearing too-little clothing to protect her against the bitter-cold weather. For seven years the family lived in this primitive circumstance.

Mary had left all her friends and all her family behind and had no one to play with, no one to be friends with. Her stepmother spoke only Danish and, to Mary, seemed entirely disinterested in her step-daughter. How does a little girl learn how to be big girl when she is all alone in a wilderness? And how does she learn about the world around her, and how to read and write, when there are no schools?

One incident demonstrates her determination to please her father and do her job, regardless of her own comfort. While hauling hay, it was customary after a few fork-fulls were on the wagon, for her father to toss a pitchfork up and then toss Mary up on the load to “tromp.” Once she landed on the fork and a tine went deeply into her leg. Rather than upset her father, who was very tender-hearted, she pulled the tine out (with considerable effort) and went on with her work without telling anyone. Mary’s later years of poor health and severe rheumatism were probably caused partly by this strenuous life during her youth and the severe exposure to winters on the Idaho frontier.

Thus, the entire young life of Mary Elizabeth Freestone, my grandmother, was very difficult and lonesome. She had lost her mother at age four, had stayed with relatives until age eight, then lived in a lonesome wilderness with only her father and distant stepmother for another seven years. It does not seem surprising that she developed a Spartan, humorless temperament and a fierce determination to see her own children rise above the backward youth she had experienced. It does not seem surprising that, in 1879, when Mary was fifteen, she refused to move with her father to Ashley Valley, where Vernal, Utah now is. Ashley Valley was even more primitive than Franklin Meadows. By this time, Mary had had enough of the frontier, wanted to go to school, and stayed for the next year in Alpine with her father’s widowed sister, her Aunt Rhoda.

After just a year in Alpine, she found work with one of the Walker brothers in Salt Lake City. The Walkers were prosperous bankers and merchants and put Mary to work as a housekeeper and governess for their children. Mary remembered this as very hard work, but it was a liberal education in how prosperous people lived and managed their affairs.

Education had already become a high priority in the mind of this teenager. After twelve or fifteen months of employment she had saved enough money to enroll in the new Brigham Young Academy in Logan. Where had she learned what she needed to know to get admitted? How was she able to make her way in the environment of an academy? She may have attended school briefly as a small girl and perhaps for one year just after returning from Franklin Meadows.

Mary left one little school workbook, labeled “Alpine City, Utah.” It is filled with evidence of studies in math, geology, grammar (including diagraming sentences) and a lot of theology from the Bible. She also left another workbook in penmanship and a series of well-written essays on a variety of subjects. These showed good spelling and extraordinary penmanship, a beautiful script worthy of a highly educated person.

Mary attended Brigham Young Academy for perhaps only three months, or maybe as much as two semesters. At the end of the spring term in 1882, the students exchanged messages in little autograph books, with one greeting per page in the form of a poetic sentiment. Each page is written in beautiful script – a very impressive exhibit, when compared to twenty-first century handwriting, which is often illegible at the college level!

John Maughan of Weston, Idaho was looking for a school teacher for his family and neighbors. He was referred to this outstanding young lady, who had just begun her education. He hired her and she boarded with the Maughan family while teaching in Weston. She met the Maughan’s son, Harrison. After teaching for only short time, on 14 December 1882, eighteen year-old Mary Freestone and twenty-one year-old Harrison Maughan were married in the Endowment House. Harrison took his new bride to a two-room log home in Weston, where she helped get the family finances going by teaching school another year.

Throughout their marriage, Mary Freestone was the dominant partner in a good, but probably not great marriage. She was strong willed, highly motivated, very conservative and totally dedicated to seeing that her children got the best education they could. Mary was a perfectionist in an imperfect world, and probably dealt with a fair measure of frustration caused partly by memories of a sad and lonely childhood. A granddaughter, Virginia Kammeyer, who grew up in Logan, remembered her as a “strangely silent, withdrawn woman.” Another granddaughter, Ruth, whose memories of Harrison have been mentioned, thought of her as “severe and unbending.” Ruth said her own mother, Olive, had thought Mary to be a very difficult mother-in-law, who was disdainful of girls and never approved of any of her sons’ wives.

In later years Mary was vexed with chronic ill health, a very relaxed companion and inadequate means to meet all her goals. But she left a remarkable legacy in her children, who achieved what she had been unable to achieve. Among her eight children who lived, there were six university graduates – three bachelor’s degrees, two masters and a doctorate. This was an unusual accomplishment for an uneducated mother in that early day!