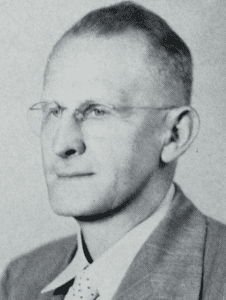 Active in sup as a chapter officer and committee member, he was also a member of the St. George Rotary Club, editor of Dixie Roto-Vue; secretary of the Washington Field Canal Company, correspondent for the Deseret News for the St. George area and author of three books on historical and genealogical subjects.

In church activities he was bishop of the St. George East Ward for eight years, a stake high councilor and stake patriarch. He held B.A. and M.A. degrees from Brigham Young University and was a college professor at Dixie College until 1951.

The St. George Chapter, Sons of the Utah Pioneers, lost its beloved historian and charter member when Arthur K. Hafen, 83, died Nov. 15, 1971 in the Dixie Hospital following a stroke.

He had been a resident of St. George for 58 years and was exceedingly active in community and church affairs. There was scarcely a ward or stake position,“A.K.”, as he was affectionately called, did not hold at one time or another.

Arthur loved pioneer history and was the author of three books: “Dixie Folklore,” “Beneath Vermillion Cliffs” and “Devoted Empire Builders.”

Just prior to “A. K.’s” funeral, the great bell in the St. George Tabernacle tolled 84 times, one for each year of his age.