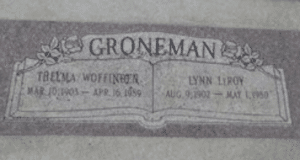 Lynn LeRoy Groneman, 77, died May 1, 1980 at the Utah Valley Hospital of a heart attack. He was an active member of the George Albert Smith Chapter of the Sons of the Utah Pioneers.

Self-employed as a contractor until retirement. Active member of the LDS Church. Served on Board of Directors, Utah Valley Care and Training Center; former chairman of Provo Planning Commission; served as delegate to county, state and national Democratic conventions; served as president of Utah Lake Lions Club, also as zone chairman and deputy district governor.