by Dale I. Nilson 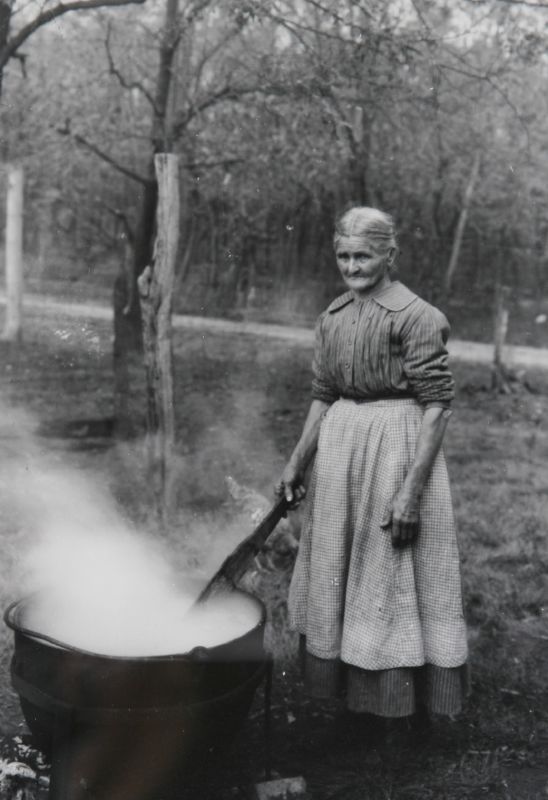 It was just an old shanty in Great Grandmother’s homestead town but what a wonderful building it was for only one room. They were usually built onto or close by the home and connected by a breezeway. It was here she did most of her summer cooking, washing and baking, canning fruit, pickles, berries and jams and vegetables and drying corn and apples in the sun to escape the inside heat of the home. The old shanty would accommodate sauerkraut making if you were German, grind coffee beans if you were Scandinavian or make tea if you were English. Here also, is where homemade soap was manufactured pioneer-style. You could easily tell when this project was going on by the pungent smell. How could anyone forget that experience of bygone days? Never, if you were fortunate enough to have lived in those days of Granny’s shanty in shantytown.

As I recall, soap was made from pork grease and scraps of bacon and ham rinds. Beef and mutton tallow and lye made from wood ashes were also included. All that was lost was the squeal of the pig. The soap, very soft, was cut into bars and put out in the sun for weeks to dry. When ready, it was chipped into a cauldron of boiling water that had been heated on the wood-burning stove and then poured into the wash tub of the washing machine, if you were fortunate enough to own one. If you didn’t, the soap was used for rubbing on the scrubbing board in a tub of hot water by hand. Then the clothes were hung out on the [nowadays] forgotten clothesline in the warm sunshine and fresh air. Young people today know little or nothing of scrubbing boards or outside clotheslines in the warm summer breeze. They are familiar only with gas or electric tumble tub dryers. A bar of soap put in the grain bin would keep mice out. One whiff of homemade soap would clear out your sinuses and save a doctor bill. To bathe with this soap would put you on the persona non grata list. This soap would easily cut out black wagon axle grease from overalls.

The mice would only dance and sing around a mousetrap bait with margarine, but every time they would go for butter or cheese. Boys would experiment with smoking cedar bark in a homemade corncob pipe—what an aroma! The hired man would give you a big chaw of chewing tobacco—a few minutes later you would be afraid you would die, the next minute afraid you would not die. Ah, the smell of Cuban Havana outside in the fresh air on a cold winter night. Churning butter by hand, making one pound packs in the butter mold—priced at 20 cents per pound to pay off the mortgage on the ranch and keep soles on your shoes, a straw hat on your head and overalls on your back. Ten cents would take you to a movie once a month to see William S. Hart, Hoot Gibson, Fatty Arbuckle, Gloria Swanson, Charlie Chaplin, Ethel Barrymore, Greta Garbo and Wallace Berry. Five cents for a candy bar, an ice cream cone, soda water or popcorn.

You would take your pony into the blacksmith shop to get your pony shod and ask Seldon “Sass” Jensen if he would shoe her for a penny a nail and double it each nail. “32 nails?” he would say. “H-LL no, how dumb do you think I am?” Then you would start counting and doubling the 32 nails. When you would get towards $250,000, he would change his mind. The price of shoeing one horse was $1.25. Take the wheat farmer who thought he had a real good deal; a hired man, a “drifter” agreed to work for a kernel of wheat a day and double it each day. By the end of the year the hired man owned the ranch, home and buggy and a span of mules. Little things count if done faithfully and consistently over long periods of time. Sometimes the turtle wins the race, even on a fast track!

We will always remember Granny for her expert soap making and all the other activities in and around her good old shanty. The apple, cherry, gooseberry, rhubarb and huckleberry pies made with fresh fruit from her garden or orchard. It is with pride, appreciation and love that we honor her and her pioneer labors of years gone by in her shanty, in her big front apron, in shantytown. Once in a while it is good to be an old-timer, even with our aches and creaking joints. Would we live them again? Yes. Would we, or could we, forget? Never, never.