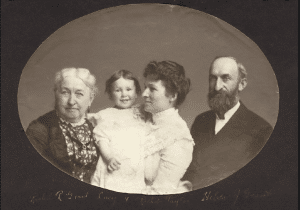 Rachel R. Grant, or Grandma Grant as she was affectionately known throughout the church, was a pillar of strength, and was known for her sunny disposition which endeared her to all with whom she came in contact.

Mrs. Grant was the sixth child and third daughter of Caleb Ivins. She lived with her uncle at Homerstown and it was there she first heard the Mormon elders. She laughingly used to relate that after being induced to go hear the elders, she went home and prayed that the Lord would forgive her for doing such a thing on the Sabbath. She continued to go, however, even after the Baptist minister threatened to banish her from his church. Eventually she joined the church and in 1842 she visited Nauvoo with one of her cousins and there became acquainted with the Prophet Joseph Smith, also John Taylor and other leading members of the church. She went through many severe trials; among them was the experience at the time of the martyrdom of the prophet.

After this tragic event, she returned to Homerstown, N.J. and remained there until 1853 when, in company with her sister Anna and a number of other people of that neighborhood who had joined the church, she emigrated to Utah, arriving in Salt Lake Aug. 10, 1853.

She eventually met and fell in love with Jedediah Morgan Grant, second counselor to President brigham young. They were married in November 1855. A year later her first child was born, a son she named Heber Jedediah Grant. He was born November 22, 1856. She was the sixth wife of Jedediah M. Grant.

Jedediah was confined to his bed at the time his son was born. He had typhoid which was compounded by double pneumonia. Nine days later he died on December 1, 1856, leaving Rachel a widow in very humble circumstances. Had she renounced her religion, she would have been welcomed and cared for by her eastern relatives who were financially well off. She preferred to remain in Utah and rear her son in poverty. She earned a meager living by sewing and keeping boarders. It is well known the kind of teachings she instilled in her only child as he grew to manhood. He knew the love of a good mother and knew how to work. He grew in the gospel as well and went on to become the seventh president of the Church of Jesus Christ of Latter-day Saints.

For 35 years, Rachel served as president of the Relief Society of the Thirteenth Ward. When she became eighty years old, she went to live with her granddaughter, Mrs. Lucy Grant Cannon. She remained as active as she was able and took an interest in all things pertaining to her church and family and friends. She died in 1909 at the age of 88 years, after a bout with pneumonia.

This article originally appeared in the Nov/Dec 1990 issue of Pioneer Magazine.