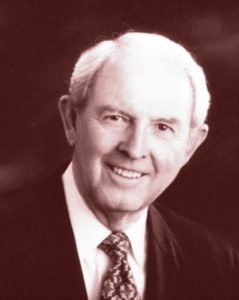 Graham H. Doxey, 69, former president of the Salt Lake City chapter, Sons of the Utah Pioneer and sup Life Member No. 72, died November 20, 1969 in a Salt Lake City hospital. He was manager of Zions Securities Corporation, which operates the real estate holdings of The Church of Jesus Christ of Latter-day Saints.

Mr. Doxey had been active in real estate affairs for 45 years. He was founder of the Doxey-Layton Realty Co. and director of the Murdock Travel Agency, Inc. also the Heber J. Grant & Co.

He served on the board of directors of the Beehive State Bank, now the Commercial Security Bank. He was former president of the Milton Bennion Foundation.

In church service he was bishop of the Third Ward in Salt Lake City from 1924 until 1929 and served on a mission to New Zealand, 1919-1922. He served as president of the East Central States Mission.

He was born Jan. 5, 1900, in Salt Lake City, son of Tom Graham and Pearl Hayes Doxey. On Sept. 26, 1923, he married Leone Watson in the Salt Lake L.D.S. Temple. She is first counselor in the general presidency of the L.D.S. Primary Assn.

Survivors include 29 grandchildren and a great-grandchild.

Funeral services were held Nov. 20, 1969 in the Monument Park Stake Center and burial was in the Salt Lake City Cemetery.