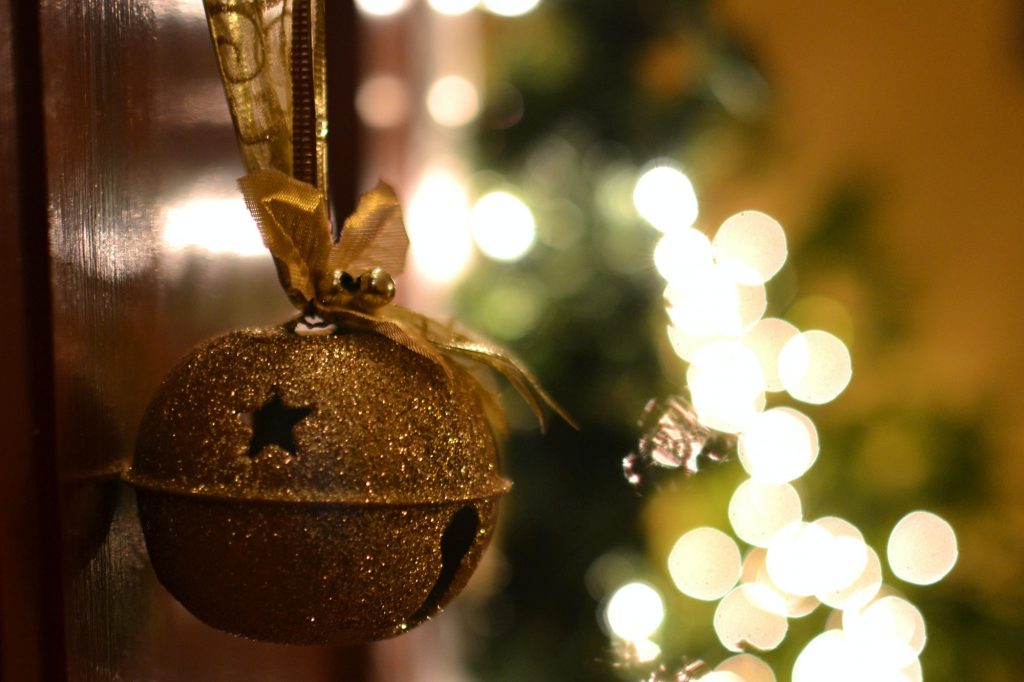 Deep-toned bells and carols proclaim the Saviour’s birth on christmas day. With gifts we express our good will one to the other and turn our thoughts to the christ Child—to the life and work of Jesus. Christmas is a time when we should move just a little closer to His teachings and with a little more determination endeavor to live His way of life—with more love of God and our neighbor.

God gave to the world His only begotten Son to enlighten the minds of man and to become a saviour to mankind.

On the night of the birth of our Saviour, a group of shepherds lay out, with their flocks, on the hillside.

“They must have been men looking out, in their simple way, towards the invisible and eternal, and seeking that kingdom of God for themselves which was one day, as they believed, to be revealed in their nation at large. Only that mind which has sympathy with external nature can receive in their true significance the impressions it is fitted to convey, and only the heart which has sympathy with spiritual things can recognize their full meaning.”

Eder—the tower of the shepherds stood out against the silence of the valley of Bethlehem. The stillness over hill and valley was broken only by the bleating of the sheep. During the night, poor and humble shepherds watched their flocks. The unclouded brightness of the Syrian sky, with its innumerable stars were over and around them. In the east over Bethlehem appeared a new and brilliant star.

While some of these shepherds were watching their flocks:

“Lo, an angel of the Lord came upon them, and the glory of the Lord shown round them, and they were sore afraid. And the angel said unto them, ‘Fear not, for, behold, I bring you good tidings of great joy, which shall be unto all the people.

For, unto you is born, this day, in the city of David, a Saviour, who is Christ the Lord, and this shall be the sign unto you: Ye shall find the babe wrapped in swaddling clothes, lying in a manger’.”

And suddenly there was with the angel a multitude of the Heavenly Host, praising God and saying—

“Glory to God in the highest,And on earth peace. Good will toward men.”

The light faded from the hills, as the angels went away into heaven and the valley of Bethlehem was again in the quiet shadow of the night. Wondering at the vision with sincere emotion and full of simple trust, the shepherds were anxious to see the babe and its mother and with eager haste they hurried to Bethlehem, and there found Mary and Joseph and the babe lying in a manger.

“The shepherds spread abroad the story, with hearts full of grateful adoration.”

Almost twenty centuries have past since that holy night and down through the ages has come the sacred story of the Christ Child to thrill the souls of the children of the earth and to bring to mankind a ‘way of life’—true religion undefiled—to bring about his spiritual perfection—the purification of his conscience—and salvation of his soul.

“The freshness and interest of the name Jesus,” says Geiki in his Life of Christ, “and its power as a great factor in the spiritual history of the world, increase with each generation. The influence of His life, His words, and His death, have, from the first, been like leaven cast into the mass of humanity— He gave us the magnificent dowry of a faith in One Common Father of the whole human race, and, thus, of a world-wide brotherhood of all mankind. He confirmed the doctrine of our immortality and scattered abroad the germs of a heavenly life by His fundamental requirements of love of God and our neighbor. All reforms of individual and public life lie veiled in these principles, awaiting the advance of our moral sense, to apprehend and apply them.

They have already given freedom to the slave: raised woman; purified morals; mitigated war; created liberty; and made humanity a growing force, in things private, civil and political. All that love to our fellow men can prompt finds itself only a copy of that life which was spent in continually doing good, and the noblest self-sacrifice for others finds itself anticipated by Calvary.”

For almost 2,000 years Jesus has been the Light of the World and the Wonder of Man. Together with good cheer and the joy and the gifts of Christmas day, let there also be an abundance of the true spirit of Christ among us, that throughout the world there shall indeed be “Peace on Earth, Good  Will Toward Men.”