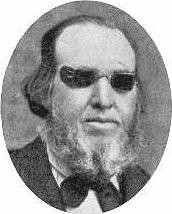 Thomas was blind; as to the cause we have no explanation.

At age 35 years, he and his wife Margaret joined the church in Wales. They had three children: Joseph, 7; Hyrum, 6 and Maria, 1.

They left Wales and went to Liverpool, England, where they boarded the Sam Curling ship and sailed with a group of all-Welsh Saints. They set sail on April 17, 1856. They were five weeks reaching Boston, Massachusetts [on] May 23, 1856. From there they took the train to Iowa City, Iowa.

They had to wait three weeks until the handcarts were finished, and they left in the Edward Bunker Company about the middle of June with 300 Welsh Saints in the company. Giles, though blind, pulled his handcart much of the way.

Soon after leaving Iowa City, baby Maria became ill and died, and was buried beside the trail. A few weeks later, Margaret, his wife, died and was buried along the trail. The two boys, Joseph and Hyrum, were sent back to join another group of Welsh Saints because Thomas was unable to care for them in his blind condition.

At this time, Thomas was assigned to a tent with about ten other people, including Thomas Evans (with only one leg) and his wife Priscella Merriman Evans, a widow with five children, another blind man and a man with one arm.

At Fort Bridger, Wyoming, Elder Giles became seriously ill. Captain Bunker held the company up for two days and then ordered the camp to move on, but he left two men to bury the sick man (Giles) as they didn’t expect him to live only a few hours. Remarkable faith and frequent administrations of the elders who were left with Giles kept him alive until evening when Parley P. Pratt, the apostle, reached their camp. Pratt had known Giles in Wales. Elder Pratt gave thomas giles a remarkable blessing. In it, he made these promises: that he would be instantly healed and made well; that he would rejoin his company and arrive in the Salt Lake Valley safely; that he should there rear a family and that, because of his faithfulness, he would be permitted to live as long as he wanted to.

These blessings were fulfilled in their entirety. Elder Giles rejoined his company and reached the Salt Lake Valley [on] October 2, 1856, remarried and lived to bless and name seven of his grandchildren. Thomas Giles died November 2, 1895 after he had expressed a desire to go.

After Thomas D. Giles arrived in Salt Lake, he specialized in music — he played the harp and was widely known as the “blind harpist.” He also sang hymns and popular songs, and he traveled about the state giving concerts and playing for dances.

His harp is in the Daughters of Utah Pioneers Museum in Salt Lake City, Utah.