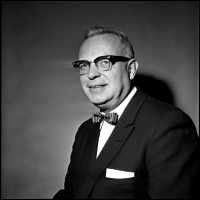 Parley Pratt Giles, 57, former national officer with the sons of utah pioneers and the mormon battalion, and prominent church and civic worker, died Mar. 1, 1972 in a Salt Lake City hospital following a stroke.

Active in church organizations, he was bishop of the Douglas LDS Ward and former superintendent of the Bonneville Stake Sunday Schools. He was a high priests group leader and served a mission to Great Britain. He was an alumnus of the University of Utah.

Funeral services were held Mar. 4 in the Yalecrest Second Ward Chapel and burial was in the Wasatch Lawn Memorial Park.