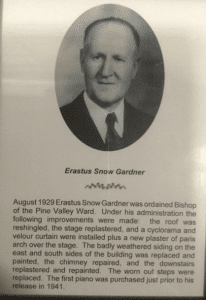 erastus snow gardner, 77, of St. George, Utah, charter member of the dixie chapter of the Sons of the Utah Pioneers, died June 2 in a St. George hospital of a stroke.

In church service, Mr. Gardner was a high priest and bishop of Pine Valley Ward for 13 years.