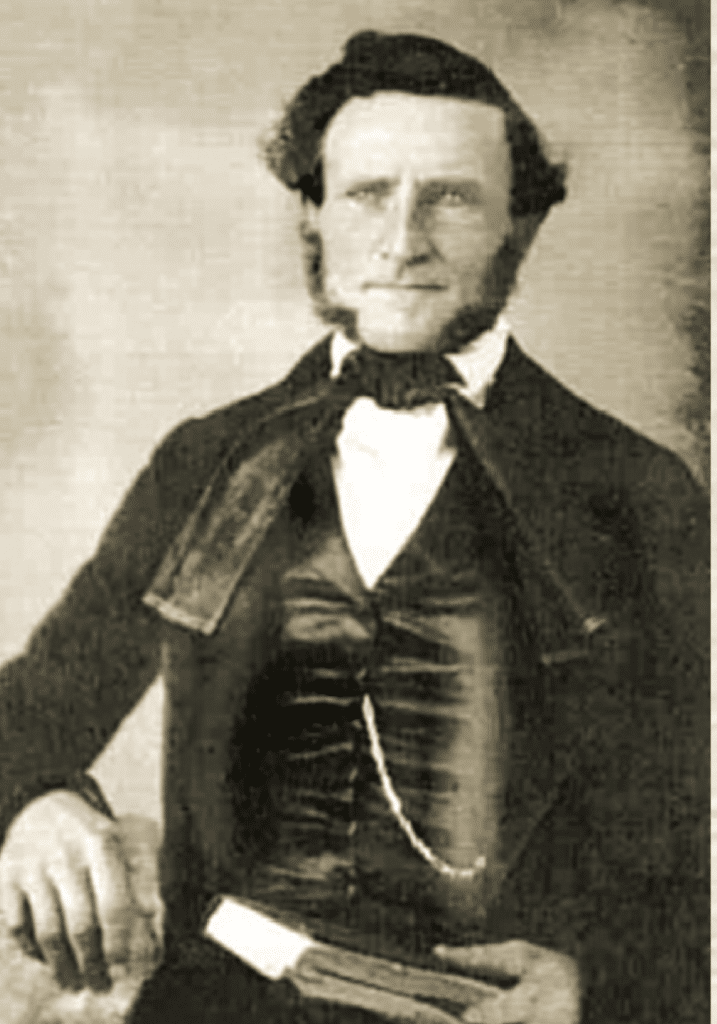 In the fall of 1852, [John S. Fullmer] was called to fulfill a mission to England. He left his two wives [in Davis County, Utah], who between them had twelve children— all under fourteen years of age…  While laboring at Rochdale, England, on March 29, 1853, he and his companion administered to an eighteen-year-old boy by the name of Halsden Marsden, who had been born deaf and dumb. As they finished administering to him, the boy spoke and indicated that he could also hear. On February 27, 1855, upon completion of his mission, Fullmer sailed for home on the ship Siddons, during which time he served as president of a company of 430 Saints who were emigrating to the Salt Lake Valley.
After seeing this company of Saints to Philadelphia, PA, he returned to New York to meet two more shiploads of Saints (the Juventa and Chimborozo) and to convey them to their outfitting place and boarding boats for St. Louis.” 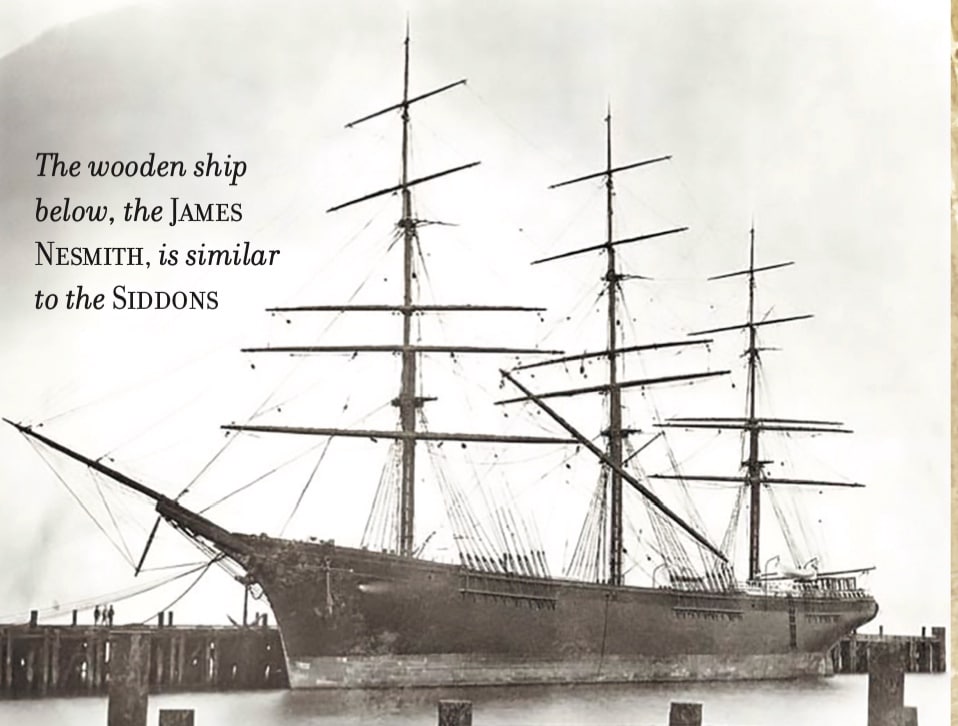 President [Franklin D.] Richards had appointed me to preside and Elders Aired [Isaac Allred] and [James] Pace to be my counselors and today he brought our names before the Saints for their approval. We were cheerfully and heartily sustained after which the elders laid their hands on my head and set me apart to fill my present appointment. . . .

This morning the captain with two government officers—a physician and clearing officers—came aboard. The passengers passed their inspection. … I had all the able-bodied men on board numbered and then made seven divisions of them answering to the seven days in the week, and then laid all the duties of the day, such as getting up early in the morning, and cleansing the ship, being the officers or rather workmen of the day and guard at night. … I next divided the ship into four wards for religious purposes and I appointed a president over each ward. … I instructed the presidents to hold some sort of meeting in their respective wards each night. . . . These meetings, I find, have quite a reviving tendency, especially when the Saints are well enough to attend them.

We did not get out into the open sea . . . until full seven days. . . . We were much amused the other day, it being a fair afternoon. The captain had a place cleared on deck and had some of the invalids brought out to sun themselves, which others that were more able he had to jump the rope. In fact, he loves to sport with children, and he actually took one end of a rope and helped to swing it for an hour while the children and even the lasses jumped it like good ones. He has repeated this exercise several times since to the no small annoyance of the mates but he has ingratiated himself very favorably with all on board. . . .
Last Sunday the Saints throughout the ship partook of the sacrament of the Lord’s supper. … We had two deaths aboard, the first was buried on the first day of sailing and was yet a babe, the second was born only some six hours before its death. I hope these will be the only casualties of the sort that may occur on our voyage. Three marriages came off according to arrangement before starting. . . .

We toss about like a log upon the water. Sometimes one side up and sometimes another, in a kind of alternate sottery motion reminding me of the cradle upon the treetop, when the wind blows the cradle will rock. This keeps up a kind of friction among the passengers and boxes from one side of the ship to the other, which is rather new to landlovers and somewhat endangers heads, legs, and arms as the case may be. . . .

I found the health of the Saints so far improved this week that I took advantage of a fair day and distributed the goods for making tents and wagon covers. The tents are now in process of being made, but the English and Scotch made an awkward job of it. They [are] sometimes made to “do their first works over again.”. . .

I try to amuse myself in reading the history of Napoleon Bonaparte. . . .

This evening, just before sunset, a large iceberg is seen to the south of us about ten miles distant. It appears as high as the mast of a large ship would and must therefore be one hundred or one hundred fifty feet above water. The captain says they have eight feet of depth below the water to run above it. This must then be a tremendous mass to run against. It is white as the driven snow as the sun is shining full upon it. I wish to see no more of them, or if I do, I want to see them at a distance. . . .

The young folks are just beginning to enjoy a dance which was got up on a part of the deck as the sun was fast declining. . . .

Today I took receipts of all the Fund passengers for the amount of their passage from Liverpool to Philadelphia. I also gathered a report of the number of births on board, and found that there was three children born, two boys and one girl, the first of which was a male, died in six hours afterwards. . . .

Today I am sorry to say another child . . . was consigned to the deep. An old sister, seventy two years of age, is lying very low. . . . Another birth … a fine daughter today.

On Sunday last I addressed the Saints in two different wards and rallied their spirits for they began to be impatient for their deliverance.  To have a little variety we had the Preston Choir to sing and play for us. We had two recitations . . . one of which was that splendid production of Eliza R. Snow on the death of the prophet and patriarch. It seemed to me as well delivered as it was written.  I never heard it done so well. . . .

We now had just feasted our longing eyes with the welcome sight of land. This was the south east coast of New Jersey, near the Delaware Bay. . . . We are in hopes of reaching Philadelphia by tomorrow night. . . .

This morning it was quite foggy and the sun could not be seen for several hours after it had risen. Consequently our signal could not be seen until about eleven o’clock when we saw in the distance a signal of recognition from a pilot boat which was standing out to sea for us. . . . The pilot came aboard about noon and all hearts rejoiced. The captain was as much pleased as any of the passengers for he had become quite impatient and had begun to damn the wind, the weather, the fog, the ship, and the luck. We found ourselves some distance out to sea and it required some hours to reach the Bay where we had been last night. It was after dark before we turned into the Delaware. This makes fifty one days from the River Mersey to the River Delaware, an unusually long voyage. . . .

Set sail again this morning. . . . Finally we cast anchor again and waited for a steam tug. During the afternoon one came alongside. The captain pays her $75 to take the ship to port. The night became dark with fog and the anchor was again cast, and the tug fastened alongside for the night.

The morning was beautiful and mild. The ship was soon put under motion and it was almost aggravating to see that noble ship which had so majestically defied and overcome the wild sea for fifty two hard contested days, now taken by the nose by a mean little insignificant looking thing and led whithersoever the thing had a mind.
. . . The farther up the better until at length we put into port which was on the tongue of every prayer that was offered up during the voyage. How delighted all were.
Recommend0 recommendationsPublished in Articles