Our pioneer ancestors would recognize little of the techniques and methods used in today’s backyard gardens—and they would be puzzled by why so few families garden and spend so much money when they do.

Let’s begin with the soil itself. Pioneers did not need commercial fertilizer. The soil was new, meaning it had never been mechanically disturbed. Soil health is almost entirely dependent on something called mushroom mycelium, which is a mass of thread-like branches running underground. These branches fruit by producing mushrooms. Mycelium is what allows the roots of vegetables to absorb phosphorus, nitrogen, potassium, calcium, and dozens of trace nutrients necessary for healthy plants. Today’s farms and gardens are deeply tilled as a method of weed control, and this process destroys the mycelium. Soil without mycelium is dependent on commercial fertilizers that have been chemically designed for plants to absorb without the aid of mycelium. The pioneers would likely marvel that we spend money to rototill our backyard gardens, which then forces us to spend more money on commercial fertilizer. The pioneers did not use chemicals of any kind.

The gardeners of pioneer times faced fewer garden pests than we do today because many of the pests we face are not native but have been accidentally imported. Their gardens were also more spread out, leaving them less vulnerable to disease and crop-speciﬁc bugs that thrive when gardens are crowded.

They did have pests—Mormon crickets are a famous example. Chickens were a primary defense, and “chicken moats” are still a mainstay concept for organic gardeners today. Building a chicken moat simply means fencing off a garden square and then allowing the chickens to run in a larger square around or near the garden. This way the chickens cannot get into the garden, but they can eat any bugs or pests. This method works remarkably well. It also makes it easy to feed garden trimmings to the chickens.

Pioneer families faced fewer weeds because many of the things we consider to be weeds they considered to be wild or medicinal edibles—mallow, comfrey, lambsquarters, dandelions, purslane, and more. Many of our modern weed plagues had not yet been accidentally let loose upon the land— they did not battle cheatgrass or bindweed, for example. In addition, weeds are often rampant in modern gardens because of tilling. This may seem counterintuitive, but modern science has afﬁrmed that native soils contain a natural “seed bank” in which seed stays dormant for decades. Turning the soil brings banked seeds to the surface, where they sprout in the warmth and light. Without tractors and tillers, the pioneers disturbed the soil much less than we do today, which helped keep down weed growth.

Pioneers used “leaf mould”—composted leaves—as a top dressing, as a seed-starting medium, and to create raised beds in densely clay soils or enrich naturally weak native soils. Animal manures were abundant. Allowing those manures to decompose turns them into a nutrient-rich soil that has been used for hundreds of years. Both leafy and animal manures heaped into piles become hot as they decompose. These hot manures were used for winter pit gardening, heaped around cold frames and cloches to keep starving mice and voles from eating the winter harvest. Chicken manures are rich in nitrogen because chicken feathers, which naturally mix with chicken manure, are almost pure nitrogen. Backyard chickens were a symbiotic source of backyard food, providing eggs and protein along with a steady supply of soil-enriching manure. Pioneer chickens were fed little, if anything, when the land was not covered with snow. If given access to grass and weeds, chickens will more or less feed themselves. No part of backyard animals was wasted. Animal blood was used to enrich the soil, as were bones. “Cracked bones,” sold by the barrel, were advertised as a premier fertilizer even up to World War I in newspapers and garden magazines.

Garden seed has changed dramatically since pioneer times. The vast majority of seeds available to the public today are hybrids, which are patented and corporately owned. The 20th century was the ﬁrst time when seeds were legally owned by corporate entities. In pioneer times, seeds were saved from the backyard garden and actively traded, bartered, and gifted. Less often they were sold. Backyard seed-saving was widely understood and almost universally practiced. Seeds were usually purchased only when the gardener could be sold on the idea that the seller’s seed had some strategic new beneﬁt—and even in those cases, the pioneer gardener would have planned to purchase only once, saving their own seed from that variety afterward. Purchasing seeds each year would have been considered spendthrift. Vegetables that produce true seed at home are called open-pollinated. In pioneer times, open-pollinated seed was the only kind that existed. Today almost all seed is hybrid or genetically modiﬁed. Sadly, 94% of the varieties of garden seed that were available in catalogs in the U.S. in 1903 are now extinct. A network of gardeners around the nation is currently trying to save the last of the open-pollinated seed, much of which is on the verge of extinction. Open-pollinated vegetables must be isolated while ﬂowering to be kept pure. The pioneers, who had more open space than most families today, used isolation by distance to keep their seed pure. They were also much more likely to grow single varieties of vegetables than modern backyard gardeners. Squashes, which are notoriously promiscuous, were hand-pollinated for purity in pioneer times as necessary, using muslin fabric to keep insects from reaching the squash blossoms.

Forcing vegetables was critical to pioneer gardeners, who did not have the luxury of modern grocery stores. In truth, pioneer families forced vegetables in winter to provide themselves with fresh food. They grew “night vegetables” in their root cellars by forcing the greens of chicory, beets, and dandelions in the dark. Today few families practice this age-old method.

The pioneers were familiar with vegetable forcing varieties that are extremely rare today, such as Amsterdam forcing carrots, Parisienne carrots, winter lettuces, rutabaga, and perennial onions, to name a few. Glass bell jars called cloches and glass houses quickly became common in Utah after the pioneers established themselves, just as they had been for centuries in Europe. The ﬁrst documented use of a greenhouse was recorded in the ﬁrst century by Emperor Tiberius of Rome, who had his servants use sheets of mineral mica to force cucumbers—the emperor’s favorite—in winter. Plate-glass greenhouses were used in Rome about A.D. 500 and quickly spread across the civilized world. In pioneer times, millions of glass bell jars were used in the U.S. and Europe to force the food used to feed cities and families, along with millions of what they called “sashes,” wooden frames covered in plate glass used for winter growing. Today, forcing for true year-round eating is almost a lost art. That trend is beginning to change, though, due to concerns about the economy, commercial food safety, and self-sufﬁciency. 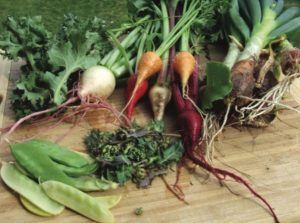 Root storage was the last vestige of pioneer gardening methods to be dropped in the U.S. In past eras, life without a root cellar was almost unthinkable. Row upon row of summer’s bounty was preserved in glass canning jars for winter consumption, along with crocks of pickles and bins of onions, potatoes, carrots, parsnips, and more. Canning food was not a technique widely used by the pioneers but became popular at the end of the 19th century. Pioneers used cellars dug well below the frost line to create a cave-like space, maintaining a constant above-freezing temperature during winter. Dirt ﬂoors allowed the heat of the earth to rise up, and the native moisture of the soil provided the humidity necessary to preserve roots. Vegetables were stored “dirt-on,” which allows certain enzymes in the soil to help preserve the carrots, potatoes, and other food. The pioneers knew from experience that roots that were washed before cellaring spoiled much faster.

It is also interesting to note that so-called “baking eggs” or “cooking eggs” were stored in root cellars in winter and sawdust-packed ice houses in summer. Just like roots, eggs that are not washed will keep fresh much longer in storage. This is because each egg has 6,000 microscopic pores that are sealed by a natural coating when they are laid by the hen. Once an egg is washed, that coating is removed and the egg begins to spoil unless refrigerated. The pioneers stored unwashed eggs for baking and for winter selling and trading. Eggs were sometimes preserved using the “butter” method, which meant taking them from the hen while they were still warm and coating them with butter before putting them in storage. Before modern grocery stores, so-called “baking eggs” were a precious commodity, especially in winter.

Refrigerated eggs, self-suiciding hybrid seeds, petroleum-based fertilizers, chemical pesticides and herbicides—and all the money we spend on them—would simply be unrecognizable to our pioneer ancestors. Spending hard-won cash at the grocery store while foregoing a family garden would have been unthinkable to those who were the ﬁrst to make the Utah desert blossom with food and ﬂowers.

This article originally appeared in Vol.60 No.2 of Pioneer Magazine (2013)