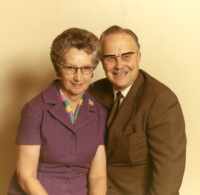 “I owe my success as a mortician to my violin,” believes Harold B. Felt, proprietor and owner of the Felt Funeral Home in Brigham, Utah, who is celebrating his 36th year in business here, “If it hadn’t been for my musical instrument I would have missed out on a wonderful career.

“It all started back in 1929, the year of the infamous depression, when I graduated from the Ogden High School in Ogden, Utah with honors as a violinist.

“My ambition was to become a professional musician and perhaps teach or conduct orchestras. But I needed money to pursue my career, so when Ogden mortician N. Oscar Malan, of the Malan Mortuary, asked me to play my violin at funerals, I jumped at the chance to earn extra cash.

“After this I played my violin at many other funerals—and when Mr. Malan was short on help, and asked me to drive the funeral coach for him after I had played at services, I said, ‘Sure.’

“This was how I began to become more involved in the funeral business.  Finally when Mr. Malan’s son, Austin Malan, was called on a two-year church mission, I was given a full-time job at the mortuary, as assistant funeral director.

“After I took this job I filed for an apprenticeship under a licensed funeral director, which Mr. Malan was. I continued my schooling at Weber College in Ogden, going to school first, and then working at the mortuary.

“I was in charge of a 15-piece dance band. Its members were students who were earning college tuition by playing at college dances.

“When Mr. Malan’s son, Austin, returned from his Church Mission, there wasn’t enough work for both of us, so I quit working for the Malan Mortuary, and started to work with the Larkin Mortuary in the same city.”

“After a year of experience, I was convinced that my career was to be that of a funeral director. So I decided to go to the California College of Embalming at Los Angeles, in California.

“As I remember it, I had just enough money to pay my tuition and have $10 left over to live on for a month. Another student and I pooled our $10s each, $20 was enough to keep both of us eating for the first month.

“We got a job in a mortuary, and were allowed to sleep in a room here, until we finished our schooling.

“One year later found me out of the College of Embalming and back at the Larkin Mortuary in Ogden. I worked two years more as a licensed mortician, funeral director and embalmer. I have been doing this ever since.”

June, 1934 was another milestone in Mr. Felt’s life.  On the 10th he convinced E, A. “Lige” Larkin of the Larkin Mortuary in Ogden that they should open a mortuary in Brigham City, which is 20 miles north of Ogden.  At that time the community had no real mortuary of its only—only a makeshift which was a side-line of the Stohl Furniture Store. (The mortuary business was conducted in the rear.)

On the 11th of June Mr. Felt got married.

After Mr. Felt and Mr. Larkin inspected possible sites in Brigham City for a mortuary, they found an old adobe building for sale. It was located near the famous Latter-day Saint (Mormon) Church Tabernacle, and had a large vacant lot for parking area.

The price was reasonable and Mr. Larkin and Mr. Felt spent $7,500 to remodel the site after its purchase.

And so Brigham City’s first funeral home was opened in 1934, with Mr. Felt as manager. Two years later, he bought out the Larkin interest.

Six months later Mr. Felt bought the Stohl business which was closing out. With the purchase of the Stohl assets, Mr. Felt became operator of the only mortuary in Brigham City.

“This business has been a wonderful life for me and my lovely wife, the former Lillian Hayes, who was a nurse at the Dee Hospital at the time of our marriage,” Mr. Felt reports.  “We have enjoyed operating the mortuary business while raising a family. We also participate in church and civic affairs in our community.

Mr. Felt has long been active in the Sons of the Utah Pioneers and presently is a member of its national board.

Mr. Felt has many interests.  He established the seagull aviation corp., a flying school at the Brigham City Airport.

For many years he also has been a leader in Brigham City’s annual Peach Day Harvest festival and parade which takes place the first week in September. He has been parade marshall, and has sponsored beauty queens in the Peach Day Competition.

He was the second person in Brigham City to receive the “Distinguished Service Award” from the Brigham City Junior Chamber of Commerce.

He was also one of the original incorporators of the sentinel insurance company of Salt Lake City, and is still a director of this firm which was founded in 1948 to provide funeral expenses for members. He has served as president of the Utah Funeral Directors Association.

Other activities include membership in the National Selective Morticians Association and the Order of the Golden Rule. He has also been president of the Brigham City School Board, and was active in helping build the new Box Elder High School.

Mr. Felt still plays his violin, which he keeps at the mortuary for music during emergencies, and his wife helps him with some of the services.

“She’s No. 1 in my life,” concludes Mr. Felt, “but my funeral home has a pretty big role, having played ‘second fiddle’ for over 36 years.”

He is civic binded and has been president of the Box Elder Chamber of Commerce and also the Brigham Oty Rotary Club.

But the prime one, of course, is the violin, which helped him up the first rung of his ladder to success.