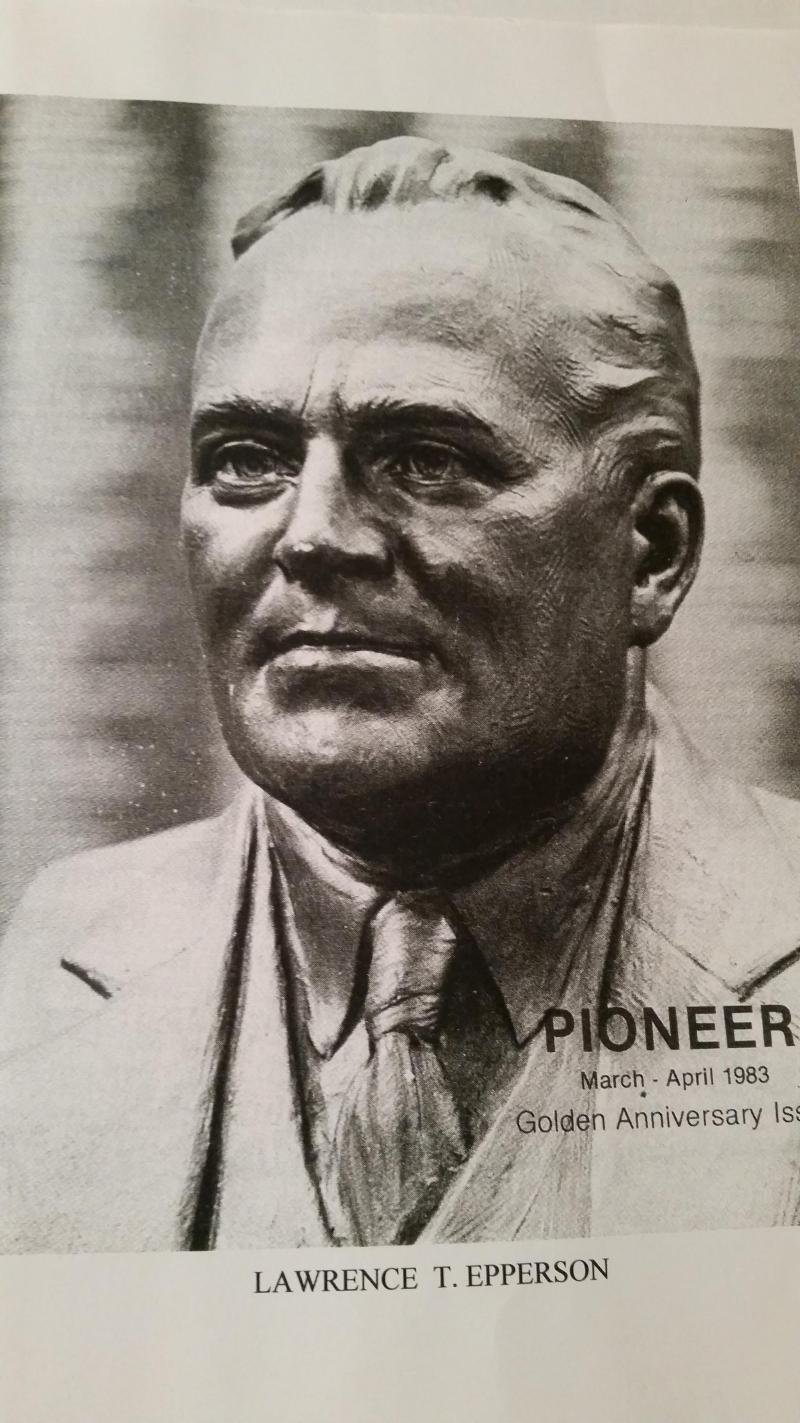 According to two histories, compiled by Dr. Orson D. Wright and Gustive O. Larson, the concept of the Sons of the Utah pioneers goes back over 70 years. Senator reed smoot made the first effort on July 20, 1907 with an organization known as the “Sons and Daughters of the Utah Pioneers.”

Later, in 1910, Parley P. Jenson tried again. Neither effort was successful, except to keep alive the idea.
Little was done then to perpetuate the organization until the George Albert Smith Chapter (the oldest Chapter) in Provo was organized and sustained for five years (1928-32). It was called “The Sons.” (Somehow “divorced” from the Daughters by this time).

Lawrence T. Epperson was elected first president and served two and one-half years (1933-35). The organization soon reached a high of 87 chapters, or local “camps,” with nearly 3,000 members. By 1941, however, it had dwindled to just a few active members. At this critical time, Lawrence T. Epperson was again elected president and then re-elected for three more terms. His leadership kept the organization going during the war years (1941-45) while three sons served in the U. S. Army.

Lawrence’s great friend, Harold H. Jensen, became the next president in 1945 and continued to build the membership up to over 1,000. In 1946, J. Wendell Ashton took over the reins and led the sup on a great adventure, culminating in 1947 in a historical re-enactment of the pioneer trek, in automobiles converted to look like covered wagons.

As his children, we can all testify that Lawrence was a kind and loving father! As his son Vaughn once put it: “Truly, father led the way as an example of one who honored our pioneer heritage!”

William B. Smart (his longtime bishop, and now executive editor of the Deseret News) said of him:

“I never called Lawrence to a duty that he did not accept it with a smile on his face. As the founder of the SUP, he was a man of God. He radiated love to all he came in contact with. He maintained a humble and contrite heart until the end.”

At the time of his death, in July of 1959, the leaders of the Democratic Party sent him the following memorial:
I quote in part—

“…whereas Lawrence T. Epperson has been an active leader and Utah County Chairman who served with honor and distinction, and contributed in his home town and state and nation, and never sacrificed principle for political expediency, even in the face of bitter opposition, and whose talents and time were remembered, the Democratic Party of the state and nation hereby recognize him as a civic, church and political leader who has brought outstanding recognition to himself, his family, his state and party and made his memory inspire his family and all of us to a greater effort to emulate his many virtues.”  Dated 9 July 1959

“If we could live the life of gentleness, friendliness and devotion to high principle that he has lived, I’m sure we will be able to see our last days come without any misgivings. I always felt he had a special handshake for me — and a special warm greeting. I’m sure others had the same warm feeling about their friendship with him. He was a man who loved his associates and loved people. He had a great faith in God and his fellow men!

“Lawrence graduated from brigham young University as a three-letter man. He was outstanding in youth organization, a baseball star, a track star and talented in publication and student government.

“He, along with the rest of us, suffered disappointments in life, but took what came to him and continued to be devoted to his family, friends and the work of the Lord. I feel I am better for having known him!”

Horace B. Swenson tells us:

“Brother Lawrence T. Epperson founded the SUP in 1933. He was president through 1935. Then he came back from 1941 to 1945, because of his great organizational ability, to keep the SUP alive and get things done! I went to him for advice when I needed it. I didn’t see him much, but when I did see him, things seemed to happen!

“There were many instances that would border on the miraculous! I grew to love him and addressed him by his first name. Ours was not only a heritage organization, but also fraternal! Brother Lawrence was of the opinion that we should not only parade the greatness of the pioneers on the 24th of July, but follow the example of their greatness throughout the year.

“He always urged the setting up of a museum, and lent much to help me there! To him, these were not just old things, but witnesses to a great past. And he truly believed that a people without a great past has little hope of the future. He said: ‘We are not just ancestor worshipers, but we must do some pioneering ourselves!’ He lived up to that goal in his own life!

“On one occasion the US Historians of State and Local history had a national convention at pioneer village. As they stood there, assembled from all parts of the country, reviewing the pioneer surroundings, up the street came marching men in uniform. They are announced as the ‘mormon battalion’ of the Sons of the Utah Pioneers. A great historian standing near me said; ‘That is a great drummer leading them! Yes, it was a great drummer!’ Brother Lawrence, carrying the big drum with such ease and rhythm! He was a great musician, and his favorite song was ‘Come, Come Ye Saints.’”

“We cannot honor the children of our Father in Heaven without honoring the Father. It was wonderful to sit in the high priests meeting in this ward with Brother Epperson, and sense the progress he had made in this, the most important endeavor. Sometimes, in the humblest of men, there is a spark that when received by the strong makes them stronger! This was the sweet, loving, affectionate, sincere, devoted character of Lawrence. None could come in contact with him but what they were better for it.

“Lawrence held many positions of trust, served honorably with Loretta in the New England Mission, was repeatedly re-elected to the same positions and was loved civically and politically. I think he exemplified how wonderful it is to belong to an organization of service. How much his life would have been robbed had he been a listener and not an actor! The life of Lawrence distinguished itself. He rendered great service to his fellow men!”

Conflict, Tragedy and Peace: The Utah War A History of Sons of Utah Pioneers

Guardians of the Pioneer Heritage