This article originally appeared in the Vol.60 No.2 issue of Pioneer Magazine 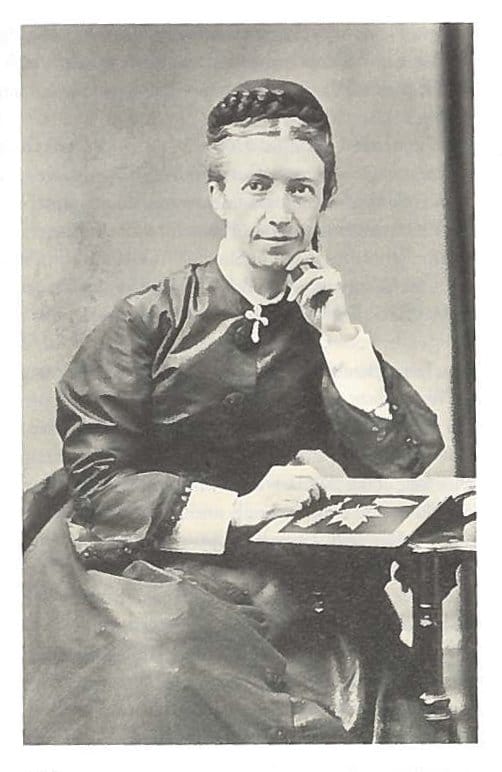 Coming from England and Pennsylvania, Mrs. Kane viewed the Mormon villages she saw with Eastern eyes and described them differently than inside observers like George A. Smith. En route to Provo, after her party stopped in American Fork to water the horses and taste Bishop Harrington’s “delicious apples,” she drew this concise comparison with her Pennsylvania towns.

“These Mormon villages have such wide streets and every house is so set about with trees that they look like a bouquet arranged by an artist in a vase, each spray of ﬂower and leaf disposed to show its beauties instead of the close-set masses of the ﬂorist. . . .”1

“The ‘streets,’” . . . [Mrs. Kane] wrote, “are smoothly graded wide lanes, water murmurs along the edges of all the side paths, which are overhung with trees; vineyards and orchards surround the houses. . . . At sunset we heard the cowherd’s long tin horn, and went out [of the Snows’ Big House, where they lodged] to see the Town troop of cows come home. The great drove halted in the central square, and then each cow walked slowly toward her owner’s home. The people were throwing open the doors of sheds, and [the] gates of little paddocks in which the milky mothers were to spend the night.” On Sunday afternoon no cows were around. “The Plaza and the Tithing Yard were ﬁlled with wagons when we emerged [from the Tabernacle], and nothing could be more [like] Bucks County [Pennsylvania] than the conduct and appearance of the respectable farmer-folk . . . as they took their [wagon] seats and exchanged cordial greetings before dispersing.”2

elizabeth kane, only 36 years old at the time, loved to wander through town with her husband and/or their two young sons (ages 9 and 11). . . .

“An old man joined us . . . as we passed a cottage which, but for its wide vine shaded piazza [porch] would have looked thoroughly English with its whitewashed rough-stone walls and deepset casement windows. . . . An old squaw now came forward bending under a heavy load of the yucca root, which they use here for soap. She turned aside, entering a gate in the wattle fence of a garden across the road. A very small adobe cottage stood in the midst of it, of which the old man who was talking to K. [Elizabeth’s reference to Tom] proved to be the owner. He bade us come in and showed us that he had a ﬁne vineyard, a beautiful peach orchard and a few pomegranate almond and ﬁg trees. He is a Southerner, and was glad to revive his memories of Alabama in chatting over old times to K [a Civil War veteran].”3

Since the St. George census-taker in 1870 counted just four Alabama-born residents, only one of whom — at age 48 — could be considered old, we can safely conclude that the man with whom they chatted was John M. Moody, a farmer and one-time member of the City Council. His “little fertile oasis,” as Mrs. Kane would have termed it, included a second home for two of his three wives and all of his ten at-home children, judging by the census listing of two separate households. . . .

On a weekday morning, the Kanes started out for “the top of the [Black Bench] mesa” but were soon stopped by Mrs. Lucy Young, Brigham’s St. George wife (or “Bigham Squaw,” as the Paiutes called her), who insisted on showing the boys how she watered her yard. . . .

“At this time of year there is no limit to the time allowed for watering, but later, when the crops start, each lot has but three hours in the twenty-four assigned to it. . . . She has three, one of which is allowed to remain uncultivated, so that she has nine hours water time for the two lots. . . . Her garden is the best looking in the village. . . . From the acequia in the street, which runs very rapidly there are two troughs made of boards which traverse her lots. . . . At intervals there are ‘gates’ in the sides of the troughs. . . acting as valves which are kept closed by the pressure of the water.”

Mrs. Lucy then showed the Kanes her grape arbour.

“One long trellis runs back some distance from the house, and she had several thousand vine-cuttings in a bed ready to set out. She means to have a ‘pleached [plaited or interlaced] alley’ all round the lot.”

In addition, her “wee Estate is planted with thriving peach, plum apricot and apple trees. Then she has another part set out with Luzerne that yields six crops a year.”

What made Mrs. Lucy’s garden such a model for the village besides the fact that she had an English gardener to assist her? Her husband had bought the lot from a prominent merchant named Joseph Birch, who had hauled in “One thousand cart loads of sand, and two thousand of earth … to make the rich loam I [Elizabeth] saw, and ﬁll up ‘the slough.’” Then the lot “was under drained in every direction to carry off the water charged with ‘mineral’ that percolated through it. . . . She [Lucy] showed us a deep ditch running towards the Clara, carrying off the outﬂow from her lots. Into it the smaller drains discharged.”4 . . .

On the evening of their visit with Mrs. Lucy, the Kanes attended the Annual Festival of the St. George Gardeners’ Club, held in the club’s building on the same block that showcased another of the town’s most striking gardens —that of the group’s founder and president. Elizabeth was “amused by the number of countrywomen to whom I [she] was introduced.” The club “being composed of genuine practical gardeners, not dilettanti [dilettantes], of course the Scotch love of the art showed itself by their being present in force.” The tables and even “the deep window recesses of the room” were covered or piled high “with the products of Dixie. . . . ” “There were grapes gathered today [Jan. 21]—having been sheltered by dampened matting; and grapes gathered in the autumn, a little dried but deliciously sweet.” Moreover, “There were several bottles of grape wine,” but placed there only as a courtesy to her husband, she assumed, for “the healths were all drunk in fair water.”

The crowd cheered the ﬁnal toast to “The health of the people of St. George. May their cellars be full of wine, their barns full of plenty, their hearts full of freedom and their cradles full of babies!”5

In spite of the presence of a fair number of Scots, including Elizabeth’s good friends, the so-called “McDiarmids,” the town’s leading horticulturists were New Yorkers. Club President Joseph E. Johnson had moved to Dixie on his own initiative from an impressive Spring Lake Villa in Utah Valley because of his interest in raising more exotic plants than the northern climate allowed.