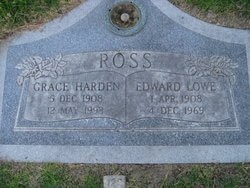 Mr. Ross worked 26 years as a clerk with the Union Pacific Railroad Company. He was a member of the Promontory Chapter of the Railroad Historical Society and the Old Timers Club No. 10. Active in church work, he was assistant High Priests group leader and a genealogist. He attended Snow College for two years.

He was born April 1, 1908 in Austin, Sevier County, Utah, a son of Joseph and Clara Lowe Ross. He married Grace Harden April 26, 1937, the marriage being solemnized later in the Salt Lake Temple.

The funeral service was held Dec. 6, 1969 at 4330 South Redwood Road and burial was in the Valley View Memorial Park.