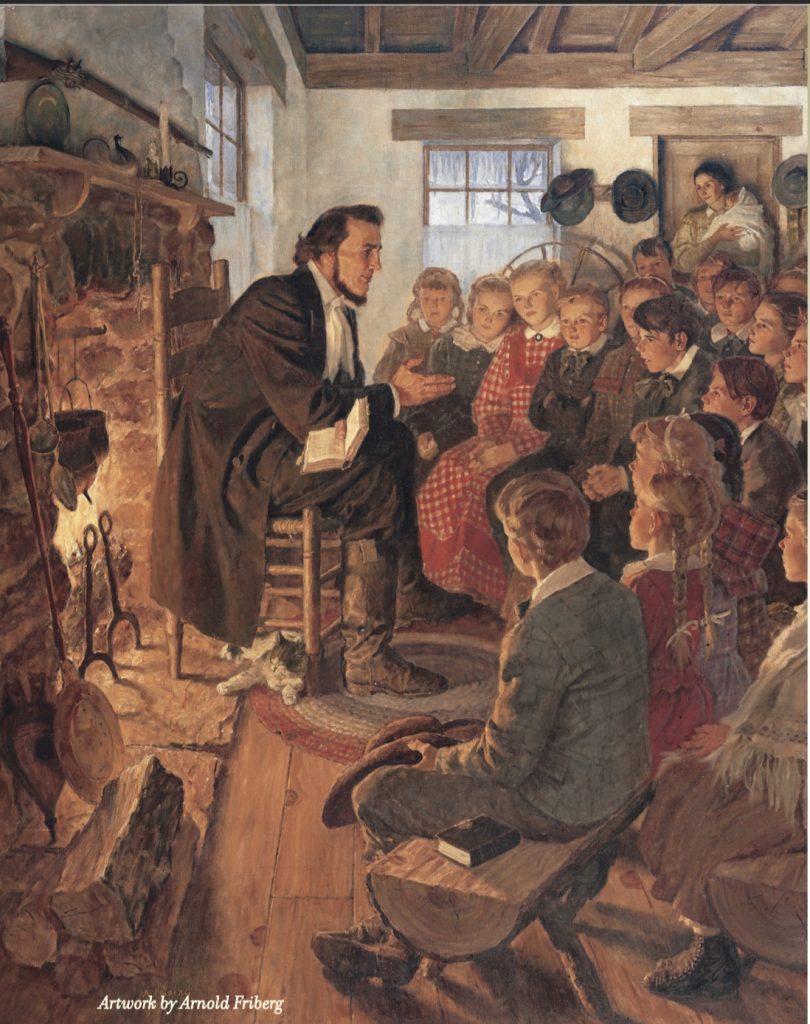 Another binding element in the brigham young home grew out of his concern, not only for the spiritual welfare of his family, but for the development of their social and intellectual needs as well. He believed:

“When parents whip their children for reading novels, and never let them go to the theatre, or to any place of recreation and amusement, but bind them to the moral law, until duty becomes loathsome to them; when they are freed by age from the rigorous training of their parents, they are more fit for companions to devils, than to be the children of such religious parents.” Therefore, he assured his listeners, “My little children … shall go to the dance, study music, read novels, and do anything else that will tend to expand their frames, add fire to their spirits, improve their minds, and make them feel free and untrammeled in body and mind.”

During the early years of Brigham’s married life, poverty, extensive periods of absence from his family, and disruptive conditions among the Saints limited the opportunities for social, recreational, and educational pursuits. Available sources pertaining to his pre-Utah years reveal little about the day-to-day activities of his children. His 13-year-old daughter Vilate studied music in Salem, Massachusetts, in 1843-44, where she learned to play the piano, but otherwise there appear to have been few exceptional cultural or educational opportunities for his children outside of the home.

After the family was established in Utah, one of Brigham Young’s concerns was the education and training of the youth. Addressing the legislature in 1852 in his capacity as governor of the territory, eager to build a thriving community, he lamented that he scarcely knew of apprentices in Utah in any trade—”no young mechanics arising to fill the places of those now at labor, when they shall have gone to their rest.” He added, “Deplorable indeed must be the situation of that People, whose sons are not trained in the practice of every useful avocation, and whose daughters mingle not in the hum of industry. .. .It well becomes us to give the proper direction to that labor.”

For Brigham, the responsibility to educate lay squarely with parents. Thus, Brigham spared no effort to provide for his own children’s education. When the school-teaching facilities in the lower floor of the lion house became inadequate for his family, he built a family schoolhouse and recruited the German educator Karl G. Maeser as tutor because he wanted the children to be “better schooled than they can be by schoolmistresses.”

Brigham Young’s interest in education extended beyond the rudiments. After the University of Deseret reopened in 1867, his older children filled many of the desks. Records show that in the two-year period 1869-71 the Church leader spent more than $1,500 on tuition for 46 members of his household. He hired private tutors in French, shorthand, and music for “any and all of his children who cared to avail themselves of this privilege.” In addition to local schooling, he gave his children who so desired the opportunity of studying professions of their choice at educational institutions in the East. Four of his sons did so. Comparatively few colleges were open to women at that time, and it was not expected that young women would be sent away to school, but at least six of his daughters did attend local academies and colleges.

Brigham also addressed his family’s needs for physical exercise and recreation. After completion of the Lion House in 1856 when most of his family were living there, Brigham built porches along the west side, where “every contrivance” of that day was available for physical exercise. “We had horizontal ladders and straight ladders, horizontal bars, back boards to straighten our shoulders and make us walk upright, jumping ropes, wands, hoops, roller skates, wooden swords, dumbbells, swings, and big balls to kick and roll about,” recalled Clarissa. Instructors were hired to teach gymnastics, fencing, and solo dancing. As a result, his daughters were in demand as dancers after the opening of the Salt Lake Theater in 1862.

In addition to these forms of exercise, a family swimming pool was built, fed with water from a nearby canyon stream. Summarizing their recreational activities, Clarissa noted that “besides all the fun we had we gained poise and developed fine, strong bodies.” For Brigham Young, deviation from strict daily routine was an important part of life: “Our work, our every-day labor, our whole lives are within the scope of our religion.

“This is what we believe and what we try to practice. Yet the Lord permits a great many things that He never commands. I have frequently heard my old brethren in the Christian world make remarks about the impropriety of indulging in pastimes and amusements. The Lord never commanded me to dance, yet I have danced; you all know it, for my life is before the world. Yet while the Lord had never commanded me to do it, He has permitted it. I do not know that He ever commanded the boys to go and p[l]ay at ball, yet He permits it. I am not aware that He ever commanded us to build a theatre, but He has permitted it, and I can give the reason why. Recreation and diversion are as necessary to our well-being as the more serious pursuits of life.”

In keeping with this conviction, Brigham found time to participate occasionally in a variety of social and recreational activities with his family. Reports have him taking his family to the Tabernacle to hear the organ, dancing with them to celebrate the New Year, and taking them to the territorial fair. Moreover, holidays and birthdays offered a break from the strains of everyday work. On three holidays in July 1863—the Independence Day celebration on the fourth, the Mormon Battalion Reunion on the sixteenth, and the Pioneer Day party on the twenty-fourth—Brigham and his daughters danced all night at the theatre. And on January 23, 1865, he visited Feramorz Little’s place of entertainment in Salt Lake City with 23 of his daughters to celebrate one of their birthdays.

Susa Young related that her father was “so understanding in the vagaries of the child heart” and solicitous of his children’s “childish needs in education, amusement and social ways” that they all loved him, and even though he was too busy to spend time with them on a daily basis he was their “hope and delight” at mealtime, prayer time, and on holidays.

For Brigham Young, recreation played an integral role in fulfilling the purposes for which mortals were created. His motto for the Latter-day Saints was

“not that they prepare to die, . . . but prepare to live is the word with us, and improve all we can in this life that we may be the better prepared to enjoy a better life hereafter, wherein we may enjoy a more exalted condition of intelligence, wisdom, light, knowledge, power, glory, and exaltation. Then let us seek to extend the present life to the uttermost, by observing every law of health, and by properly balancing labor, study, rest, and recreation, and thus prepare for a better life.”