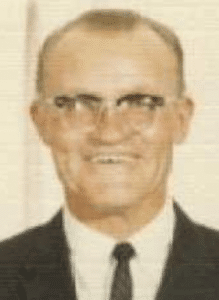 cecil dutton, 77, a Life Member of the hurricane valley chapter of SUP, died December 3, 1989 at the Dixie Medical Center. Cecil was born in Hatch, Garfield County, Utah to Joseph Ephriam and Julia Merrill Dutton. He had been a resident of Hurricane since 1937. He was a carpenter by trade and at one time he operated a sawmill at Mt. Trumball on the Arizona strip. He was an active member of the LDS Church — a High Priest and had served in the St. George Temple as an ordinance worker. He is survived by his wife Delma, whom he married June 10, 1937 in the St. George LDS Temple; two sons and one daughter, twenty-two grandchildren and thirteen great grandchildren. Burial was in the Hurricane City Cemetery.