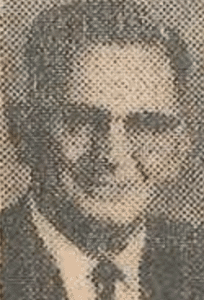 horace cyril duffin, native of Arizona and Bountiful, Utah, passed away January 2, 1980, He was born in the White Mountains of Arizona, on the Apache Reservation, October 30, 1900, the son of Brigham Fielding Duffin and Harriet Lorine Gardiner. He was the first white child born on the Apache Reservation where his father Brigham F. Duffin was a missionary for the LDS Church. His schooling was in Arizona, Old Mexico and the old Brigham Young Academy, Provo, Utah, as well as various schools in the Salt Lake area.

Horace joined the sup when a membership fee was $2.00 a year and a Life Membership $50.00. His life membership was number 43.