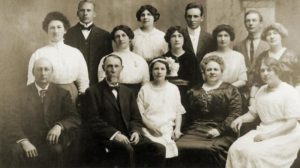 Dr. George A. Wilson, 78, charter member of the National Society, Sons of the Utah Pioneers died at Vacaville, Calif., Nov. 26, 1969 of natural causes. Since he helped to organize the sup, he has been a devoted and enthusiastic member and enthusiastic worker.

Dr. Wilson was the first vice president of the society, serving with Lawrence T. Epperson, the first president and Herbert S. Auerbach, vice president. Working with his as supporter and consultant in SUP matters was his devoted companion Myrtle E. Brown Wilson whom he married June 12, 1917 in the Logan L.D.S. Temple.

He served on a mission to Australia and was former bishop of the East Ely, Nevada Ward in Nevada

Dr. Wilson was born Feb. 19, 1891 in Logan, Utah, son of Joseph E. and Lerona A. Monroe Wilson. Mrs. Wilson is the daughter of John and Elizabeth Kershaw Brown of Preston, Ida. They have five children, 17 grandchildren and four great-grandchildren.

While practicing in Salt Lake City he became interested in research in the field of dynamics of life, of sickness and health restoration. In 1950 he went to Denver where he established a research laboratory. After four years as a research director, Dr. Wilson went on the lecture platform presenting his research findings to chiropractic conventions all over the United States.

He has authored eight books on his research and relative subjects, travelled over 75,000 miles and had more than 300 magazine articles published. He organized the International Chiropractic Biophysical Research Society in New York City in 1952, and was editor of its publication.

Dr. Wilson has received two plaques from the Research Society for outstanding services to the society. He also received a statuette trophy from the Utah Chiropractic Society at its annual convention held in Salt Lake City, May 20, 1967. Mrs. Wilson was presented with a piece of classic art. This function climaxed 50 years of service to chiropractic by Dr. Wilson.