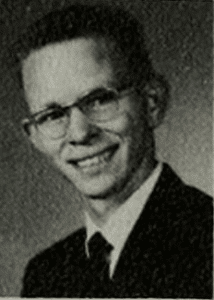 Doug Smoot was born in Provo, Utah (1934), as were his father (1909) and grandfather (1878). His great-grandfather, Abraham Owen Smoot, was sent to Provo by Brigham Young in 1868, and was soon called by Brigham Young to be the first president of the Brigham Young Academy Board of Trustees (1875-1895). Through Smoot’s leadership and financial sacrifice, the BY Academy Building was dedicated in 1892. When asked what he inherited from his great-grandfather Doug responded, “The Smoot nose and, I hope, a vision of the destiny of Provo and byu and a firm testimony of the restored Church of Jesus Christ.”

Doug grew up in Springville and met his wife-to-be, Marian Bird, in the third grade, both graduating from Springville High School. They were married in 1953. During high school, Doug was captain of the Springville state championship basketball team and garnered all-state honors. Marian was the cheerleader. He was also a champion in tennis and participated in both intercollegiate sports at BYU. He also won the Utah State Racquetball Championship in the Masters’ Division.

Doug graduated with highest honors from BYU in 1957. He went on to receive his MS and Ph.D. in Chemical Engineering from the University of Washington in 1958 and 1960, and then spent three years at BYU before moving to California, where he worked for Lockheed and then at California Institute of Technology. Following his return to BYU, for seven years, Doug was chair of the Chemical Engineering Department and then was Dean of Engineering and Technology for over 17 years. Active in church leadership, he was Bishop of the Provo Oak Hills Fifth Ward, counselor and then Stake President of the Oak Hills Stake. He then served as an Area Seventy for five years.

Doug’s professional career was spent mostly at BYU as a faculty member (1960-1963 and 1967-2003). He founded and directed one of the world’s largest academic research centers in combustion at BYU, involving 160 faculty and students focusing on clean and efficient use of fossil fuels to meet the World’s energy needs. In 1985 he was named Distinguished Faculty Lecturer, BYU’s most prestigious award, and also received the University’s Presidential Award the same year. He directed industrial and government research projects totaling more than $35 million.

After completing 42 years at BYU, Doug now (2008) is a principal in Combustion Resources Co., continuing his work in energy, fossil fuels and combustion A member of several professional organizations, he has published approximately 200 technical articles, eight invited review articles, and four books on combustion. He received the first Governor’s Medal for Science and Technology in Utah in 1987. Two of his books (written with others) have been translated into Chinese. An internationally recognized authority in energy, combustion, and fossil fuels, Doug has consulted with over 100 organizations in the U.S., Mexico, China, Japan, India, Egypt and several European countries. He is also an expert witness in legal cases involving energy, combustion and explosions. He served an appointed term for the U.S. Senate in the U.S. Office of Technology Assessment. He received the U.S. Department of Energy’s Homer H. Lowry Gold Medal and the International ASME Percy Nichols Award, both in 2002. In 2006 he was given the Distinguished Alumni Service Award by BYU and the Distinguished Alumni Award by the University of Washington (Chemical Engineering) in 2007.

Doug’s community service includes a term on the Governor’s Science Advisory Council, many years on Provo City’s Economic Development Board, Provo’s Energy Department Board, Tuacahn’s Board of Directors and America’s Freedom Festival Advisory Board, and is still serving on the last three. He has also maintained his keen interest in Utah and Mormon history. He has written or co-authored books on Abraham O. Smoot, a book on A.O. Smoot’s Historic Papers, and a book on the History of BYU Chemical Engineering. Doug is an advisor to the Mormon Historic Sites Foundation and has published two historical articles in its Mormon Historical Studies journal.

Doug Smoot initially refused an invitation to help preserve the historic BYU Academy. The 103-year-old structure, once the heart of campus, had been sold by BYU in 1975 and had sat vacant and decaying for more than two decades. But in 1995 Doug reluctantly assumed the leadership of a successful eight-year preservation effort, in appreciation for his pioneer ancestor, A. O. Smoot, who had been so intimately involved in its creation. Twenty-six years of uncertainty and near-demolition culminated in the building’s rededication in 2001 as the Provo City Library at Academy Square. As part of this effort, he produced an eight-volume series, The Miracle at Academy Square, about the preservation of the historic Academy Building,

Doug and his wife, Marian Bird, are the parents of four daughters: Analee (Scott Folster), LaCinda (John Lewis), Michelle (Nathan Hyde) and Melinda Lee (Conor Robbins). All these and their husbands have graduated from BYU.