ELIZABETH JANE RUSSELL was born April 28, 1862, in Coventry, England, to Henry and Elizabeth Walton Russell, being their first baby girl after seven boys.  However, two girls were born later.  When Elizabeth was seven years old, she came with her family to America.  They crossed the ocean in the ship Colorado and landed at Castle Gardens, New York City, New York.  From there they traveled to Ogden on the railroad, which had been operating for only three months.

In America little Elizabeth saw her first tomato and watermelon.

Two of her older brothers had come earlier. They had worked hard for money to send for the rest of the family and had a “dug-out” — their new home — ready when the family arrived.  The dug-out was in the bank of the Jordan River in Taylorsville; the walls and floor were of dirt and the roof of willows.

One thing she remembers well is the day Indians came with their dead papoose and wanted the Russell family to help bury it white-man fashion.  Father Russell was not at home, so Mother Russell took turns with the Indian and his squaw in digging the grave.  They cut willows to line the grave and cover the papoose before filling in the dirt.  Father Russell put up a marker and each year the Indians returned to the grave.

When a fire destroyed the willow roof of the dug-out, the family moved to a one-room log house by the nearby school, where Father Russell did janitorial work.  Later the family moved to South Cottonwood.  At the age of eight, Elizabeth was baptized in the Jordan River. She was unable to attend school regularly but learned to read and write well.


From the age of thirteen she worked away from home most of the time doing housework, sometimes receiving old clothing as pay.

A milestone in her life was when she went to work for the John Boyce family at Old Granite near the mouth of Little Cottonwood Canyon.  One night just after Mrs. Boyce had died and Mr. Boyce had gone into Salt Lake on business, Elizabeth was tending the children.  Feeling lonesome and jittery, she was happy to hear a wagon drive into the yard.  It was Laronzo Day, half- brother of Mr. Boyce.  After the children were in bed Elizabeth and Laronzo sat up looking at pictures—this was their first date.  After “keeping company” for three years they were married in the Endowment House and drove out to Cottonwood with a team and wagon for their wedding supper.

The young couple lived in Salt Lake City, caring for Laronzo’s aged father until his death.  When their second baby was three months old they moved to their farm in Hunter, which Laronzo had been working in the meantime.  The first Hunter home was a lumber granery east of 5200 West.  Since it was April and wet when they moved in, they pasted paper over the crafts but warm weather soon caused the boards to shrink and popped the paper.  A one-room adobe house was built, and later a lumber lean-to was added for washing and summer cooking.  Still later two brick rooms were built on.

By July, 1890, Mr. and Mrs. Day had four children:  Elizabeth, Zina, Laronzo and Myrtle.  Then sorrow came. A diphtheria epidemic, shortly before the antitoxin was discovered, struck the two older children.  The doctor suggested that Elizabeth take the two younger children away.  She refused to leave, but her husband insisted.  In anguish she put the two babies into a little wagon and trudged up the hill to stay with old Mr. and Mrs. Howell.  One of the children at home died, and heartbroken, she walked down into the field and watched them taking her child to the cemetery.  Then one of the children with her became ill so she went back home.  Two more passed away— three within two weeks, leaving only 14-month-old Myrtle.  The following year another baby was born, but lived only two days.  And when Myrtle was about seven she became ill and died.

But life went on, and in 1898, when Laronzo left on a mission there were four little Day children:  Earl, age 6; Ezra, 4; Lavina, almost 3; and Irene, 8 months.  Elizabeth backed the mission, saying, “I can do anything if you will fill an honorable mission, and maybe our luck will change.”

Courageously, she took care of her little brood in the house and did chores outside.

She skimmed the milk, churned the cream, and made butter.  Each Saturday she took the butter and eggs to Salt Lake, getting groceries from the store and cash from private customers.  In summer the butter was wrapped in wet cloth and covered with wet alfalfa to keep it from melting.  With a team and wagon she hauled her coal from Walton’s, eight miles away, and flour from the Bennion flour mill in Taylorsville.

When she came in from doing the chores, she read stories which the children had selected in the Juvenile Instructor.  Faithfully, she took them to Sunday School.

A few years after her husbands mission was completed, Elizabeth became a bishop s wife, a term which lasted for 18 years.  Etta was born in 1901 and Owen in 1904.  Pneumonia, another dread disease at that time, took him at the age of 3.

In 1909 the Days bought a two- room brick house at 3500 South and 5400 West.  A lumber room was added, and about seven years later, two more brick rooms, an upstairs, basement and porch were added.  Father Day ran this farm until he was 80, when they sold it and built the little white house near Lavina.  After 62 years of life together, he passed away, Feb. 17, 1944, at the age of 86. 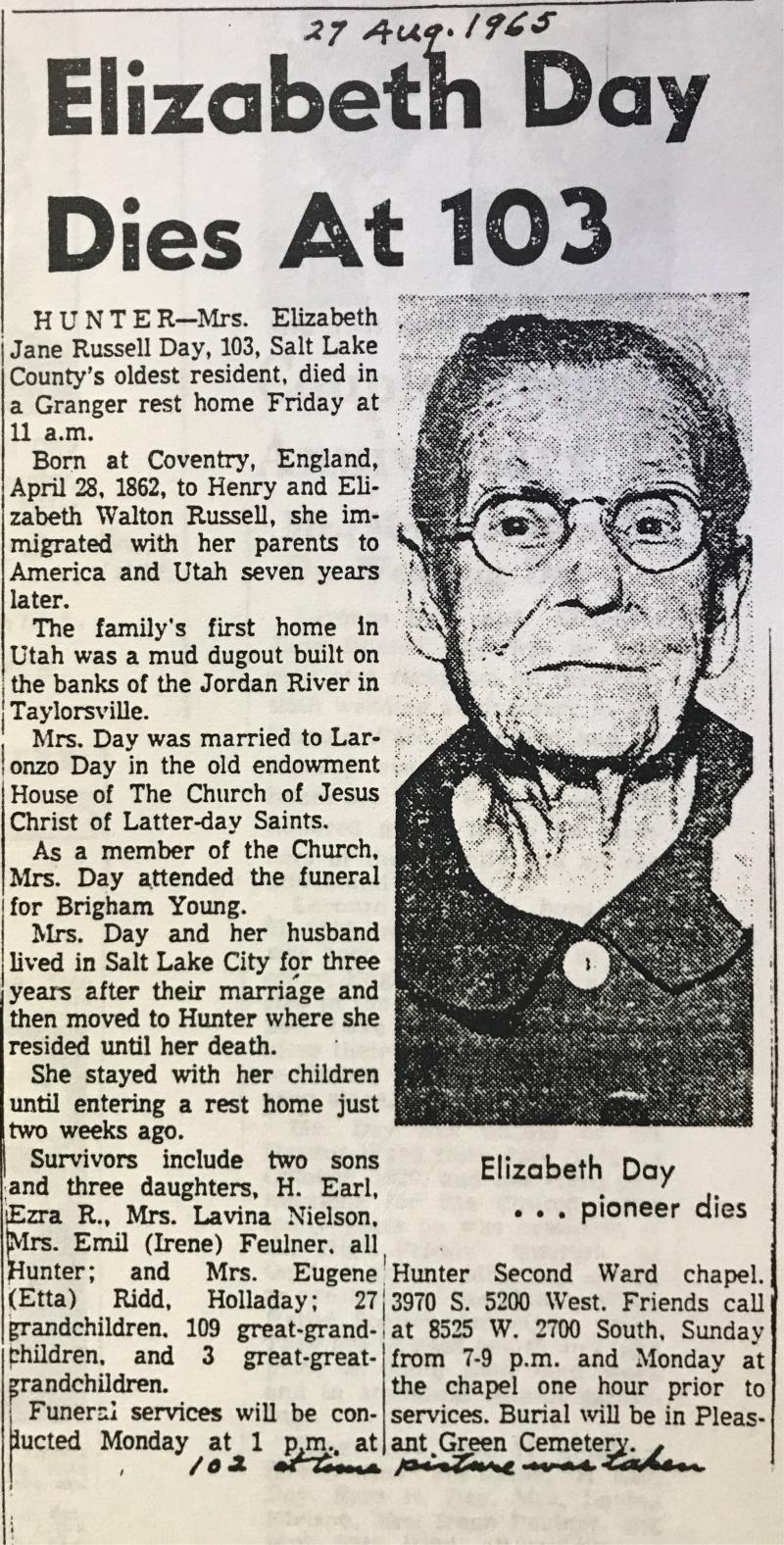 “Grandma Day” or “Aunt Lizzie.” as she was affectionately known by many, was very active in church work, being a counselor in the first Primary organized in Hunter.  She was first counselor in Relief Society for 21 years, and then served as president for 15 years.  She was a Relief Society visiting teacher for over 20 years.  She had done much Temple work, gone through the Temple with her 5 sons and daughters and at least 13 grandchildren when they were married, and has seen all of the presidents of the L. D. S. Church except Joseph Smith.

Grandma Day always led an active life and never had an operation or broken bone, and was never a patient in a hospital until she reached the age of 100 years and seven months.

She has set an example of love and kindness for a large posterity.  Her children have many pleasant childhood memories —the flower gardens, the games the whole family played, the canyon trips taken in the heavy wagon or the “luxurious” white-top rig.

These are but a few of the incidents and memories that perhaps highlight the life of our beloved Grandma Day, whose sorrows were her own, whose joys were shared with everyone around her.