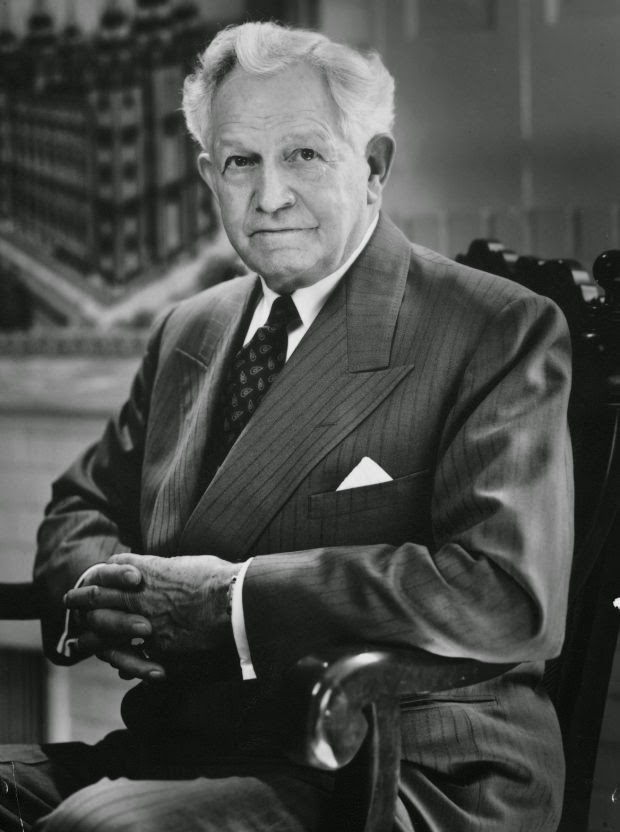 FEW MEN have had so profound an effect upon the growth and development of their people as had David O. McKay.  Seldom has anyone won the love and devotion of so many all over the world as did the president and prophet of The Church of Jesus Christ of Latter-day Saints.  When their beloved leader passed from this life on Sunday morning, January 18, millions mourned.  With a fervor almost equal to that of his nearly three million followers, business, government, educational and religious leaders throughout the country and abroad, expressed their love and esteem for one of the most amazing men in modern times.

With the passing of President McKay, it is apropos that the Sons of the Utah Pioneers join with all the other organizations, societies and groups that have paid eloquent and sincere tribute to one of our sup honorary life members.  President McKay revered his pioneer ancestors and had a great deal of love and respect for SUP and its dedication to their lofty idealism.

The growth and accomplishments of the Church attest to President McKay’s tremendous leadership. Since he became president in 1951, the membership of the Church has more than doubled.  There has been an amazing increase in the number of congregations.  Thousands of church buildings, including five temples, have been erected.  A great program of home teaching and family home evenings have been introduced and well-correlated priesthood programs have been adopted.

Up to the last month of his 96th year, President McKay was actively concerned with the spiritual, intellectual, social and physical welfare of people everywhere, striving to strengthen them with the responsibilities and challenges he saw ahead.  His counsel, his concern and his aspirations were for continued spiritual progress of mankind.

Since early youth a valiant warrior for truth and righteousness, David O. McKay showed irresistible contempt for the falsities, quackeries and veneerings that honeycomb so much of modern-day living.  Conversely, it would be difficult to find any tonic for honesty, sincerity and simple righteousness in thinking, doing, feeling and being more potent than in the life of the Mormon Church leader.

All who knew President McKay have been impressed with the magnitude of the work accomplished and the services rendered.  Yet, he found time to receive personally hundreds of men and women from all over the world in his office or apartment.  Among those have been presidents of the United States, rulers over other countries and world-renowned people in business, the arts and in politics as well as humble ones in need of fresh spiritual strength.

President McKay set an extraordinary example of active missionary work for upward of 14,000 young men and women representing the Church. He visited every country in the world where Mormon missionaries are laboring and was withal the most-traveled president in the history of the Church. He was the master temple builder, having dedicated five of these imposing edifices.

From the early years of his life, President McKay had been a successful farmer, student, missionary, educator, college president, public servant, husband and father, member of the Council of the Twelve Apostles and for nearly 19 years the ninth president of the Church.

Although feeble of limb and usually dependent upon a wheelchair for locomotion the past two years, President McKay never lost his sparkling sense of humor. As he arose to speak at a general conference assembly, two associate authorities arose with him and assisted him to the pulpit. He thanked them in his always gracious manner, and turning to the vast Tabernacle audience said, “They probably thought I could never make it.”

Late one Sunday afternoon with only a few minutes left before time to dismiss the conference, President McKay called upon Elder Mark E. Petersen of the Council of the Twelve, then general manager and publisher of The Deseret News.  Elder Petersen bore his testimony in two sentences and sat down.  President McKay thereupon arose and said: “Elder Petersen just managed to catch the last edition.”

While touring the new Visitors Center on Temple Square, the President paused before a magnificent mural and inquired, “Who is the author of that masterpiece?”  One of the brethren wheeling the President’s chair briefed him on the artist’s identity and his several accomplishments, whereupon President McKay inquired:  “Is he a member of the Church?”

“Then,” said President McKay, “why doesn’t somebody convert him?”

His gentle smile, rich resonant voice, and handsome countenance gave David O. McKay the appearance—as a noted writer once described him, “—of a prophet of old who might have stepped out of the pages of the Old Testament to walk into the hearts of his adoring people.”

You may be sure he is with them now!