By James Campbell
(As Told To Harold H. Jenson) 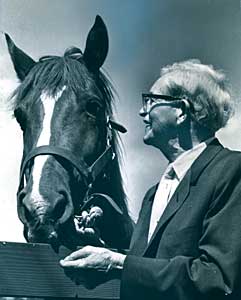 The late Pres. David O. McKay, president of The Church of Jesus Christ of Latter-day Saints, had a deep love for humanity and also a choice affection for fine horses. It is said that the way he talked to his horses and the way they responded, they must surely have understood his language perfectly.

As so often told in the press, Pres. McKay’s favorite horse was “Sunny Boy,” his saddle horse. “Sunny Boy” was a good-natured animal but exceedingly mischievous. He learned to unlatch the gate that kept the other stock in the meadow. One day he performed his gate trick and wandered off into what he must have thought were greener pastures, which proved his downfall.

The handsome animal entered a barn and got himself a meal out of a bag of grain that was opened there It was seed grain that had been poisoned against blight and black moss. That was the end of “Sunny’s” barnyard wanderings.

The president had another favorite animal named “Norman.” The good steed grew old and feeble. After watching the animal’s enfeebled efforts to get around, David O. McKay told one of his farm workers, “Let old Norman out to be shot. It is too bad but this is something that ought to be done.”

Pres. McKay sometime later led the faithful Norman out toward the canyon to put an end to the animal’s miseries, but stopped on the way to give the old horse a drink. The horse took his drink of clear, cool water from the creek and just stood and looked at his owner, as if to say, “Thank you.”

David patted the horse on the nose and recalled the many happy days they had been together—all the canyons they had climbed, all the cattle they had rounded up and all the rides they had enjoyed around the countryside.

The kindly, gentle Church leader later said, “I sort of choked up and my eyes leaked a little and I said to my helper, ‘Put a blanket on him and feed him along with the others in the barn and meadow.’ I am glad now that Norman died a natural death.”