David Dutton Yearsley Sr. was raised in a prosperous religious family in Pennsylvania and belonged to the Society of Friends “quakers”. His father was a successful merchant and, after his death, David inherited the family business and a considerable amount of wealth. He was a wise steward with his father’s fortune, but events later in life took that from him.

He met Mary Ann Hoops who was also a member of his faith and they were married on 11 Sep 1830. Shortly after their marriage, they took George W. Boyd, a 9 year old orphan boy, into their home and raised him as one of their own children. About 10 years later, David & Mary Ann heard the missionaries of The Church of Jesus Christ of Latter-day Saints and were so impressed with their message that they traveled to Nauvoo to learn more. They met Joseph Smith, learned more about the church, and were convinced that he was truly a prophet. 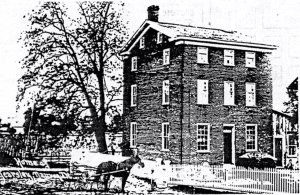 They returned home, sold their belongings and moved their family to Nauvoo where they built a 3 story brick home which is still standing. It was the only 3 story home in Nauvoo. They also soon opened a mercantile store which was very successful. David bought $3,000 worth of stock in the Nauvoo House on Feb 6, 1841 which was 5 months before their baptism. David and Mary Ann were baptized on Jul 22, 1841 by the Prophet Joseph Smith. It was interesting to note that after the baptism, Joseph Smith took a swim out into the Mississippi and back. The new members, especially Mary Ann, were greatly surprised that a prophet would do such a deed right after performing the baptisms. Mary Ann was one of the women present at the organization of the first Relief Society by Joseph Smith.

Though the Yearsleys were wealthy, they were humble and charitable. They received many requests for financial help from the prophet and from other members. Those requests were promptly honored and some were never repaid, but the Yearsleys never complained, nor did they tell their children of those problems. On one occasion, D.D. Yearsley was surprised by a company of the Nauvoo Legion that Joseph had sent to him with a request that he outfit all of them with a pair of boots with the promise that he would be repaid. He managed to do so but some of the men had to settle for shoes that were not the right size.

David Dutton Yearsley was a good friend of Joseph Smith and was frequently consulted with concerning various matters. Joseph Smith appointed David as one of a committee of 5 men to go west into the Oregon Territory to scout out some land where the Saints could live and worship without persecution. This never happened, however, because the prophet was martyred shortly after that and the men never made the trip. One record shows that David Dutton Yearsley entered into the new law of plural marriage in 1846 before being driven from Nauvoo, but the author has been unable at this point to find records of this family. The wife’s name was Harriett Wollerton Dillworth Caulflesh. The name would indicate that she was probably a widow but records of her previous family history are yet to be located, so no further mention of this person will be contained in this history.

The saints were driven from Nauvoo in 1846 and our Yearsley family was in that group. They left their large fully furnished home and packed the needed items for the trip. Then they helped outfit several other families for the trip. When they left, there was a family too poor to move so David & Mary Ann told them to stay in the home and sell what they could so they could outfit themselves and catch up with the saints. Records show that Yearsleys were on the West side of the Mississippi on 14 Feb, 1846 and were struggling with fresh snow and cold. On the 19th, another snow storm hit and the cold was bitter. David Dutton was appointed as Commissary for Heber C. Kimballs camp of 50. On 29 March, the company had only made it about 100 miles from Nauvoo because of the extreme cold, snow, and wind. D.D. Yearsley and company went out looking for work in the country on 15 April, while other companies continued on. All days weren’t so bad though because the same record indicated that Mary Ann enjoyed a pleasant outdoor quilting party with other sisters of the company on 17 May, and all had a great time.

The Yearsleys made their way through the bitter cold winter weather to Winter Quarters. The hardships were so extreme that some entire families were buried along the way.

“Thus, from day to day, slowly and wearily traveling, went the exiled Saints across the undulating surface of snow-covered Iowa. The Roads were very bad, the weather cold and stormy, and the streams, now frozen, now swollen by spring freshets, almost and at times quite impassable. Again and again they were obliged to double teams on the heavily loaded wagons, to drag them through deep streams and miry marshes on their line of travel. Some days three or four miles would be the extent of their journey. Many a halt was made, at times for weeks.”

After arriving at Winter Quarters, the Mormon Battalion was formed and both George W. Boyd and Benjamin Roberts, another boy the Yearsleys had allowed to stay with their family, volunteered to go with the Battalion. They were both allowed to go in spite of the fact that many of their cattle had died on the journey to Winter Quarters, and D.D. Yearsley would have to return to Missouri to trade any of his remaining supplies which had been left behind for more animals and food.

Before the Yearsleys left Winter Quarters, Benjamin Roberts was released from the Battalion and he returned to the Yearsley family to help them across the plains. Records indicate that they traveled with the Heber C. Kimball company in 1848. They stayed a time in Rocky Ford on the Platt River and David Dutton Yearsley died there from pneumonia which came as a result of the hardships and exposure he had been subjected to. As it turned out, the return of Benjamin Roberts was a God-send because he did his best to help the family at that point. There wasn’t even any wood available for a coffin, so Benjamin cut planks from a tree by hand and made a coffin and buried David there.

Another blessing to the family in their distress was an inheritance Mary Ann received from her father’s estate that made it possible for her family to properly outfit themselves for the rest of the journey west. In fact, she shared that inheritance with others that were also destitute in the group, thus making it possible for several families to make the trip. Benjamin continued helping Mary Ann and her eight children until they arrived in SLC. They joined the company of Captain Thomas Johnson and continued west and arrived in SLC in on 18 Sep., 1850.

In 1851, Mary Ann moved with her children to Weber (now Ogden) and located along the Weber River. Her boys took the boxes off of the wagons and hauled timber from the mountains to build their first home there. In the mean time, the family planted the wagon boxes in the side of the hill for shelter. The home was built and they lived there for one year before moving to North Willow Creek (now Willard). They again built a log cabin and began tilling the earth. In this new location, she met Albern Allen and became his second wife. Because of this marriage, Albern’s son Rufus met Mary Ann’s daughter Lavenia and they were married shortly after that. That would mean Rufus married his step-sister.

As Mary Ann aged, she retained all of her faculties but became hard of hearing. The photo clip shown here shows her in her latter years and was obtained from the DUP office in Salt Lake City, Utah. She died while at the home of her granddaughter because her clothing caught on fire while the family was away. She was ninety three years old. That isn’t remarkable in today’s world, but in her world that was phenomenal!

The legacy of David Dutton Yearsley and Mary Ann Hoopes is a trail of hope, faith, and charity. This fine couple shared what they had when they had much and when they had little. Though they endured hardships that one can’t imagine, their faith never wavered and they were admired by many then and now.