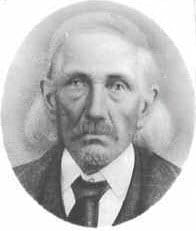 Daniel Allen, Jr. was born on December 9, 1804, just one week after Napoleon Bonaparte was crowned Emperor of France in Paris by Pope Pius VII. And this it was just 4 days after Thomas Jefferson was re-elected as President of the United States. We have little information relating to courtship and marriage, but Daniel met, courted, and eventually married Mary Ann Morris on 6 Oct, 1831.

Daniel was a great example of the early saints that gave their all to the Lord, even after coming to Utah. Daniel tanned and worked leather. His skills were in much demand and would have provided him a comfortable life if he had not chosen to join the Church. He made many articles, such as shoes, boots, harnesses, saddles, and bridles. Daniel and his wife of only one year learned of the LDS Church and were baptized in June, 1832, by Elder Joel Hills Johnson. Shortly after that, he learned that Joseph Smith was calling for help in building the Kirtland Temple. Daniel sold his 40 acre farm in Huntsberg, Cayuga, OH, for $600 and gave it all to the Church. He then moved to Kirtland and helped build the temple. He bought two city lots and built a tannery and shoe shop, in addition to working on the temple.

The doctrine of baptism for the dead was revealed to the Kirtland saints and Daniel was one of the early saints that entered the Mississippi River and did baptisms for his grandparents and many other relatives. Curiously, it was not revealed that those baptisms were only to be performed by those of the same sex, so Daniel was baptized for his female relatives as well. These ordinances were probably re-done at a later date.

The tempest of persecution began to grow uncontrollably until the lives of all of the saints were in jeopardy. The mobs descended and drove everyone from their homes in times of sheer poverty. Daniel and his family were driven from their homes and sent away without any chance to move their belongings. He lost $2,000 worth of equipment and personal goods as the mob ran about uncontrollably burning everything they could find. Having no resources, Daniel moved his family 50 miles south to Savannah, where he worked on a canal for $0.50 per day. Even with that small amount of pay, he was able to save enough to purchase an old wagon and a pair of mares so he could move his family to Missouri where the saints had moved. Neighbors told him there was no way he could make such a trip with the old wagon and the worn-out mares, so he blessed the wagon and mares and made the journey without incident.

He first settled in Log Creek in the spring of 1838 near his brother Joseph, but soon moved 3 miles north of Far West to adam-ondi-ahman along with the families of his brother Joseph, and Isaac Morley. Daniel was with a group of 100 defenders led by David W. Patton when they took a cannon from a mob of 400 men. This encounter was known as the Mormon War and David W. Patton was mortally wounded in the skirmish. He was also with another group of defenders led by Semore Brunson when they were surrounded by Bogart’s army, where they were taken prisoner. This could have ended in a worse massacre than that of a week or so prior at Haun’s Mill but General Doniphan refused to go along with plans to execute the prisoners on the public square in front of their wives and children but the Saints were still to be driven out. Mobs gathered strength and persecution mounted until the Saints were again driven from their homes. Daniel and his wife and three children left Far West on 6 Feb, 1839, (2 days after receiving his patriarchal blessing from Joseph Smith Sr.) in company of the families of his brother Joseph, Isaac Morley, and the Rossons. They journeyed 21 days to Quincy, Illinois, then went on to Lima, Illinois, where they stayed for one year to gather strength and resources.

On 1 April, 1840, they moved on to Nauvoo, IL. Again, this move began another trial of faith. They built what was to become the largest city in the state of Illinois out of a disease infested swamp. Though the saints were already suffering from lack of shelter and food, they also began dying of various diseases related to the new environment, one being malaria. Yet the city and temple were built in a short time. Daniel was there to help in the work part of the time, but was called on several missions during this time also. Notably, there was also light in the midst of the darkness of persecution, because Daniel was able to be taught in the School of the Prophets by Joseph Smith (only documentation, possibly an error). This was certainly a great experience for Daniel and it helped him prepare for what was yet to come.

Again, the persecution began to build and Joseph Smith and other Church leaders were in peril once more. Daniel joined “The carthage greys”, which was a group of 90 men assigned to guard the Prophet. Through this scene of great persecution, Daniel again built a tanning and shoe shop, a home, and paid for a share in the Nauvoo House, which was used to house travelers and tourists. Persecution, violence, and fury raged!

Daniel now had to watch his own back for more reasons than just being a member of the church. Many of those who had guarded the prophet were singled out by the mobs and were in danger of being killed. On one particular day, Daniel had been concerned all day. In speaking with his wife, Mary Ann, he told her that he had felt in particular danger. After tucking the children in bed, he saw an answer to his prayers for safety on the dresser. It was his wife’s night cap. His wife helped him tie it on & he got in bed. Shortly, there was a knock at the door, and the mob demanded to see Daniel. Mary Ann stated that he wasn’t there and invited them in to inspect the house. They went through the entire house and left with a comment that there was only an old woman in bed with a child. Inspiration had prompted the extra precautions of that night and the night cap had saved his life.

Brigham Young called Daniel on a mission to sell properties the saints had abandoned as they were driven by the mobs. He left his suffering family and went back to the hostile lands with Nelson Higgins (another of our ancestors) and Samuel Shepherd. There were many hazards, but they had some success. In the meantime, the saints were building wagons and preparing to leave Nauvoo. The mobs forced them to abandon the town before they could complete preparations, so the town was abandoned mid-winter in February of 1846.

Having completed their assignment, Daniel and his committee returned to Nauvoo, only to find buildings burning, mobs raging, and the saints gone. Daniel hurried to his home to find that his family was still alive, but his wife Mary Ann had just had a new baby and was very ill. He pled with the mob to let him stay a few days so his wife could recover, but they said they would kill them all if they weren’t gone by the next day. They hurriedly loaded what they could in the wagon and made a bed for Mary Ann and the baby. The Allen wagon was one of the last three to leave Nauvoo. They traveled together for a short distance, but couldn’t keep up because of Mary Ann’s grave condition. Being left alone with only one other wagon, they trudged through the mud and snow as best they could until they reached the head of Soap Creek (it looks like this might be less than 100 miles from Nauvoo). Mary Ann had struggled so valiantly, but could endure no more, so she whispered her last words to her loving husband…”We’ll meet again dear love in a better world and I shall wait your coming”. She died on the trail in May, 1846, along Soap Creek, Davis County, Iowa with no one but her family and the angels in heaven to mourn her passing. They dug a shallow grave and the children lined the grave with leaves and twigs before Daniel placed her body in it.

The baby (also named Daniel) was only weeks old so they tried to keep it alive by frequently stopping and milking the cow. That helped the baby to survive until they arrived at Winter Quarters, but it died there in August, 1846. In light of the tremendous trials this family had been through, they still remained faithful to the gospel and to the Lord.

No, Daniel’s trials were not over yet. He had to recover from these tragic events and re-build his resources at Winter Quarters for the next two years. After one year of parenting his little family alone, Daniel married Louisa Jane Berry on 22 June, 1847. This must have been a great day for this little family that so desperately needed a mother. They moved to Kanesville the next spring and remained there for another year before forging on to SLC with the Orson Spencer Company under captain Samuel Gulley in the spring of 1849. While en-route to Utah, many of the company became sick with Cholera and some died. Their captain Gulley was one of the fatalities. After arriving in Utah on 22 September, 1849, his skills were badly needed, so the rest if his life was spent answering the Lord’s calls to help the saints.

While in SLC, Daniel started the first tannery in Utah with Samuel Mulliner as his apprentice. While in SLC, Daniel’s son, Alma died in July, 1850. We don’t know what caused his death. Also, Daniel became acquainted with the Thomas Whiteley family and soon took Sarah Whiteley as his plural wife. They were married in the Endowment House on 2 July, 1854. He was then called to set up a tannery in Manti in 1854, and he did. Then he trained someone to run it after he was gone.

Daniel made a brief try at settling Panguitch but the hostility of the Indians prevented him from bringing his families that way. Instead, he returned to Parowan. The final move came when he was called to set up a tannery in Escalante in 1880. This made the 9th church calling to special settlement assignments, as well as his 3 prior missions back east. At that time, he was 76 years old with 26 children ranging down to 5 years of age (17 living), but he answered the call and built up a tanning, boot, and shoe shop in Escalante. He died in 1892, after giving his entire life to the Lord. He truly understood the Law of Consecration.