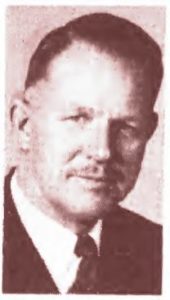 Don McCarrel Dalton, former president of the South African Mission, who as a youth was a training partner with Jack Dempsey, former world’s heavyweight boxing champion, is a prominent lawyer and civic leader in Pleasant Grove, Utah. He was an active member of the Sons of Utah pioneers and the mormon battalion.

Mack was born May 12, 1895 at Manassa, Colo., son of John Cranmer and Hannah Daphne Dalton. He was a neighborhood playmate of Dempsey, also born in Manassa, about the same time.

Mr. Dalton served in the U.S. Army during World War I. On Dec. 28, 1917 he married Myrtle Geneve Jorgensen at Castle Dale, Utah, which union was later solemnized in the Salt Lake Temple. Mack has been in all the states of the Union, either on church or business assignments with occasional vacation travels included. He has also visited almost every nation in the Western World and once had an audience with Pope Pius XI in Rome.

In civic life, Mr. Dalton served as town councilman, candidate for district attorney and in religious service performed three missions for The Church of Jesus Christ of Latter-day Saints in the Central States, Eastern States and South African Missions.

At one time he was Utah and Intermountain heavyweight boxing champion. He has spent countless hours with boys teaching them boxing and other games. He took out his law degree at the University of Utah.

Mr. Dalton has participated in numerous sup and Mormon Battalion treks and heads the Jesse N. Smith Family Association of 6,000 members which has restored the oldest adobe family abode in Utah, at Parowan. Here the SUP has sponsored a plaque which recently was dedicated by Elder Hyrum Smith, patriarch, with the Mormon Battalion present in uniform.

The Dalton[s] recently celebrated their fiftieth wedding anniversary. They are the parents of Gerald J., born at Capetown Africa, and George Edward, Marilyn Dalton Whitesides and Lena Geneve Dalton, all of Salt Lake City.

(This Pioneer history originally appeared in the May/June 1970 issue of Pioneer Magazine.)