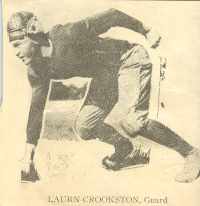 Mr. Crookston was a veteran of World War I, serving as a second lieutenant of infantry. He was an active scout worker and won the Silver Beaver Award. He was field man for the amalgamated sugar company. He was a graduate of Utah State University and member of the 1980 Rocky Mountain Conference championship football and all conference award winner.

An active church worker, Mr. Crookston served as bishop of the Logan Sixth Ward and previously had served as a missionary in the western states mission. He was group leader in the Logan Stake High Priests quorum and a temple and genealogical worker. He was a member of the Logan 14th Ward at the time of his death.

Funeral services were held in the Hall Mortuary Chapel in Logan and burial was in the Logan City Cemetery.