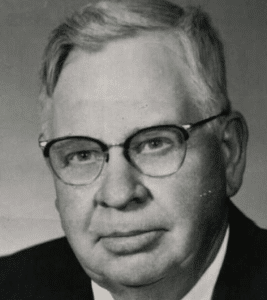 Jacob G. (Jay) Cox, long-time secretary of the Lehi Chapter, Sons of the Utah Pioneers, was Outstanding sup Member of the Year for 1970-71. The award was made at the August Encampment at Logan which Mr. Cox was unable to attend and information about his services was not then reported.  He died on July 30, 1979.

Jay served as secretary of the Lehi Chapter for eight years.With his enthusiasm, ability to see what needs to be done and his devotion to SUP, he has lifted the load of chapter administration in a considerable manner off the chapter presidents.

The Cox’ were among the first settlers in Lehi, and were highly respected in the community from their arrival here in picturesque “Lehi Valley.” Lehi youngsters were reminded of the Cox service and heritage by a display of an oxen yoke on the front lawn of one of the families, borne by the family ox team across the plains. Jay is perhaps the last of the second generation of Lehi Cox pioneers.

In addition to his services as SUP worker, Jay served on the Lehi Old Folks Committee for 35 years. The responsibility of getting the oldsters to the various socials has been discharged with selfless and complete devotion, He is also a temple worker. He and his wife, Martha Ann Taylor Cox, fulfilled a mission for the Church in 1960-61.

Jay was a retired mechanic. During World War II he was a supervising mechanic at Salt Lake Ordnance Plant and held a similar position at the Geneva Steel plant at Provo for 16 years. He maintained the old Jake Cox Farm on the Lake Road as a hobby and side line.

Long on patriotism and loyalty to community, state and country, Jay Cox was a conspicuous and enterprising participant in local holiday observances.