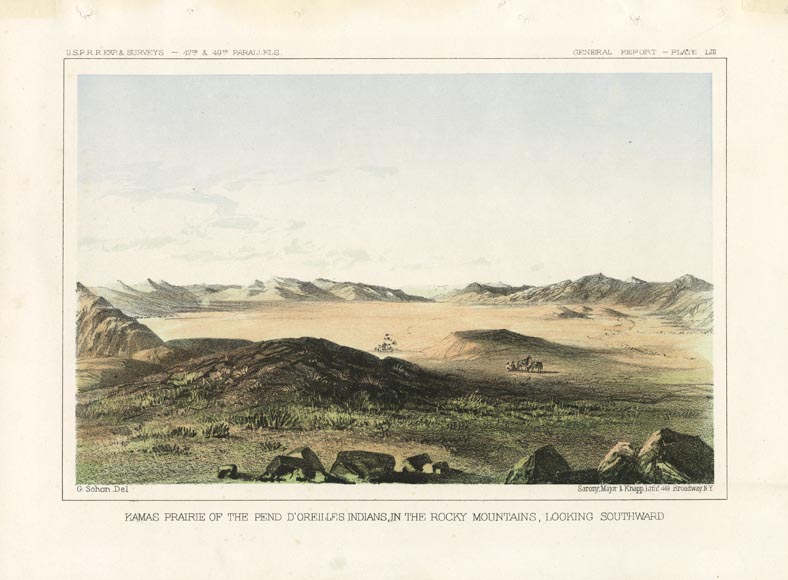 Kamas Prairie in Summit County was in aboriginal times an expansive, rolling grassland along Beaver Creek and the upper rhodes valley.  On the meadow grew a species of plant, Caassia quamash, of the lily family with blue flower and succulent bulb resembling the hyacinth.  The kamash and kamas were early forms of kamas which came into English from the Chinook jargon (Northwest) signifying “Sweet.” The bulbs of the kamas were staple food of the Indians, prepared by steaming in heated pits, and deposited in caches for winter provisions.

It was also the rendezvous for General Ashley, who had navigated down the Green River from Henry’s Fork in 1823 and came overland up the DuChesne River and the mountaineers who had been in Utah Valleys the year previous:  Provt. J. S. Smith, Sublette, Bridger, and Jackson.

In aboriginal times the kamas grew luxuriously on the headwaters of the Weber and for this reason the name was given this meadow land.

Fremont, while going down the Bear River Valley below Soda Springs on August 26, 1843, wrote:

“We obtained from them (Shoshoni) a small quantity of roots of different kinds in exchange for goods.Among them was a sweet root of very pleasant flavor, having somewhat the taste of preserved quince.Among Indians lower down on the Columbia it is the celebrated kamas, ‘Camassia esculenta’.”

Kamas is a town on Beaver Creek in Summit County.  It is one of the original branches of Weber River, in Rhodes Valley, at the west base of the Uinta Mountains.  The name is an extension of Kamas Prairie on which the town is located.

Bountiful, Utah, was first called Sessions Settlement and North Canyon, but early 1850 when the town was organized, the name was discussed at a public hearing, and John Stoker came up with the name “Bountiful.” This was taken from the land “Bountiful” mentioned in the Bible and Book of Mormon.

Mount Carmel in Kane County, 6000 feet elevation, stands on the east bank of East Fork Virgin River just north of the stream’s bend to the west.  It is in the lower country south of the Pink and of the White Cliffs. The roundish top of the mountain is somewhat between a cone and dome.  The form is pleasing to the eye. Mount Carmel was a favorite landscape subject of the western artist Maynard Dixon whose ranch home was near the hamlet of Mount Carmel at the mountain’s base.  Mount Carmel, in the upper Virgin Valley, was named from Mount Carmel in Palestine.

Mount Carmel Junction is two miles south of the hamlet on Highway 89.  This junction is the east terminus of the famous Mount Carmel Highway which wends its way from East Fork down Pine Creek to North Fork Virgin River—the floor of Zion’s Canyon.  Mount Carmel highway, with its tunnel and alcove windows, and the series of switchbacks provides an easy gradient to descend to the canyon floor. This highway is a prime engineering achievement.