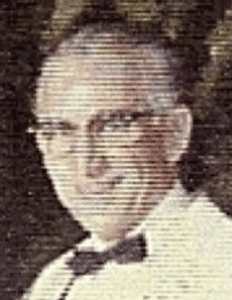 Dr. Clark attended Brigham Young University and graduated from North Pacific College of Oregon in 1934. He received a masters degree in oral surgery from Northwestern University in 1942.

Prior to his retirement, Dr. Clark had been chief oral surgeon at Utah Valley Hospital, and was formerly president of the regional and state dental societies.

Dr. Clark was a life member of Omicron Kappa Upsilon, a fellow in the International College of Dentists and a diplomat of the American Board of Oral Surgery.

He received the Distinguished service Award and the Ernest L. Wilkinson Award for his service at Brigham Young University. He was president of the BYU Alumni Association in 1960 and chairman of the school’s fundraising committee for 20 years.

Dr. Clark was a past president of Utah National Parks Council Boy Scouts, past president of Provo Lions Club and chairman of the Provo Fourth of July celebration. He was a member of the Rotary Club, Cougar Club and past director of Utah Division of the American Cancer Society.