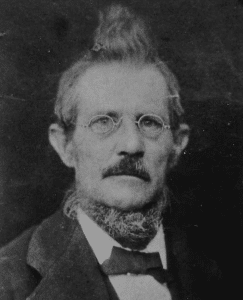 A Saint in Metal and Faith

The Leavitt heritage has often been influenced by great outside sources that have plugged into the family from the outside.  Thirza Hale Riding was the third wife of Dudley Leavitt, one of the most influential Leavitt family members and great settler of the west.  Thirza was the mother of eleven children and was a shining example of faith and honesty.  Thirza learned most of what she knew to be true and right from her father, Christopher, who lived as a beacon of faith.  His example has influenced the Leavitt heritage from the outside, and it is to him our focus will shift.

Christopher Lister Riding was born February 10, 1816 in Burnley, England, to Thomas Riding and Eleanor Lister.  From an early age, Christopher displayed an interest in metalwork and all the intricacies therein.  To help him better learn the trade, he sought an apprenticeship with a tinsmith.  By the age of 21, he had become so adept in his trade that he achieved the rank of master mechanic.  It was around this time that he met Mary Ann Hale.  Friendship turned into a budding relationship, which eventually led to love.  Christopher and Mary Ann were married in 1839.  Soon after their marriage, they met a man named John Cottam who carried a message about a new religion in America.  Captivated by Brother Cottam’s words and messages of a restored gospel, the Ridings were baptized members of the Church of Jesus Christ of Latter-day Saints in on Valentine’s Day, 1840.  By 1843, Christopher was working in the Burnley Branch, helping the Church grow in England.

The Ridings loved their church and would do anything to help it grow.  When the prophet Joseph Smith call for the saints to come to Zion, Christopher and Mary Ann quick to answer.  Christopher used traded in much of his tinwork as payment for passage to America.  The Ridings and their two children (one child had died as an infant) safely made the voyage across the ocean, landing a few weeks after their initial departure.  The family immediately travelled west and made it as far as St. Louis before the well dried up.  They simply did not have the means to venture forth any further, forcing them to make St. Louis their home for the next five years.  Christopher set up shop in St. Louis, taking advantage of his talents in metalwork.  They welcomed another child while living in St. Louis, all while scraping and saving for their eventual journey to the Salt Lake Valley.  The Ridings finally were fortunate enough to buy a wagon, a yoke of oxen, two cows, and enough supplies to last them on their trek.  They arrived in Salt Lake City in 1852, blessed with another child while on the plains.

The Ridings lived in a small home on what would eventually become temple grounds.  Christopher found much success in the thriving community because of his experience and skill, and the family soon became very prosperous.  An 1860 call to serve in the Dixie Mission moved the family from Salt Lake City to southern Utah.  The call was given by Brigham Young and hand delivered by jacob hamblin; the Ridings would never live in Salt Lake City again, where Christopher had found so much success.  But they were a faithful family and answered the call without haste.

Christopher Riding settled his family in Cedar City before travelling to Santa Clara himself for work.  He found some prosperity in Santa Clara, but all that was washed away in a great flood.  The flood caused Christopher to call for his family, and together they settled in St. George.  Christopher was not met with the same opportunities in St. George that he had found in Santa Clara or Salt Lake.  He built a small, modest home for his expanding family of two wives and eight children.  The conditions were difficult, but the family was always close and happy.

To make up for the lack of business in St. George, Christopher secured a small cart and an ox in order to make deliveries of metal ware and tools.  He would travel to many surrounding communities, including Beaver, Parowan, and Cedar City.  These trading journeys covered many miles, forcing Christopher to be away from home quite often.  He would trade his wares for flour, butter, potatoes, and cheeses.  He eventually exchanged his ox for a horse, making the trips a bit easier.  He soon became quite well known throughout Southern Utah.  His success as a travelling trader allowed him to open Riding Tin Shop in St. George, which featured Christopher’s expertise in tin work.  He would make cups, dishes, washboards, and other household items, mostly out of used materials.  Christopher’s expertise in metalwork was legendary, and he was commissioned to work on several iconic buildings in St. George, including the St. George Temple, the Tabernacle, and the original Court House.

Although very talented and busy, Christopher Riding seemed to always find time for his family and his faith.  He always remained a faithful member of the Church of Jesus Christ of Latter-day Saints, and devoted his talents and time to its expansion.  He consistently attended church meetings and sermons, faithful to his church and his god.  Christopher Riding died in 1887 at the age of 74.  George Kerry Riding, one of Christopher’s twenty-two children, described him as having “a very reserved and quiet disposition, faithful to every trust, and honest tithe payer, a friend to man, a servant to God.”  George also left an admonition about his father, saying, “may his descendants emulate his good traits of character is my prayer.”  Christopher Lister Riding has left a legacy that has and will continue to emulate his good nature and his faithful principles.

Christopher Lister Riding was born February 10, 1816, in Burnley, Lancaster, England. At an early age Christopher was apprenticed to a tinsmith to learn the trade. He was very apt at this work and became a master mechanic before he was 21. He married Mary Ann Hale 1839. The young couple had heard of the gospel of Jesus Christ from the missionaries and were both baptized February 14, 1840.

Christopher had had previous training in the teachings of the Bible and was a great asset to the church. When a branch was organized he was set apart as presiding elder.

In 1847 the family had collected enough money and goods to come to the United States, a dream they had had ever since they joined the church. At that time they had two living children and had buried their first baby. Christopher brought quite a stock of sheet tin, sheet iron, copper, brass, wire solder and other things which he knew he could use. All of this was taken as ballast for the ship and did not cost anything for transporting it across the Atlantic Ocean to New Orleans.

From New Orleans, the family traveled up the Mississippi as far as St. Louis, where lack of finances compelled them to stop for five years. Christopher plied his trade as a tinsmith, opened a shop, and found a ready market for his wares.

When they first arrived in Salt Lake City, they were housed temporarily in the little one¬room log house which now sits beside the Family History Library. Christopher soon found plenty of work and was able to build an adobe house for his family, which now numbered five children.

Eliza Adelaide Dolbell, a French girl, became Christopher’s second wife. When a call came from the church to go to Dixie to settle, Christopher sold all his interests in Salt Lake for a couple of yoke of cattle and a wagon. He took both families, including Eliza’s mother, and made the move South. He left his first wife in Cedar City and brought his second wife to Santa Clara where he proceeded to make a little home and farm.

Torrential rains washed everything away so he moved Eliza to St. George and brought his first wife down from Cedar City. He built a dugout with a thatched roof. This, with one tent and willow shed, sheltered his two families, which now included ten children. He soon was able to build an adobe house and a shop.

Christopher’s skills were needed in St. George because the temple was under construction there and he was the only sheet metal worker in the Dixie mission at that time. However, there was not enough business in St. George to provide him work, so he secured a little four-wheeled cart and an ox. He loaded the cart with tin ware and tools and visited all the towns in southern Utah, exchanging his ware for flour, potatoes, butter, cheese, etc. He made most of his wares from waste cans as it was difficult to ship in sheet tin. People saved empty cans and metal ware of all kinds for him. His store of wares consisted of buckets, milk pans, tin cups and plates, lamps, canteens, coffee pots, wash boards, etc. The ball on the St. George temple and the one on the St. George tabernacle are Christopher Riding’s work, as is the metal work on all the public buildings erected before his death. The tin-covered sphere on the temple remained until October 25, 1994, when it was replaced with a fiberglass model as part of a renovation project.

Christopher was a loyal member of the church although he was never active in public affairs due to the fact that his work kept him away a great deal of the time. He was a great reader, spending every evening in this way.

He died November 29, 1887, after an illness of only six days. He left eight children by his first wife and fourteen by his second.