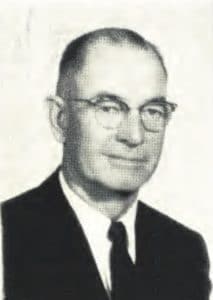 francis leroy christensen, 73, Brigham City Chapter and national president of the Sons of the Utah pioneers, died March 29 of natural causes at his home in Brigham City, Utah.

Mr. Christensen had served as President of the sup from 1968 to 1969 and had previously served on its board of directors. He was also a member of the board of directors of the Pioneer Memorial Nursing Home in Brigham City.

For 30 years he served as a postal employee and was a member of the Box Elder Water Users Assn. and operated a farm near Brigham City.

Active in church work throughout his life, Mr. Christensen was bishop of the Brigham City Fifth Ward and was president of the Box Elder Tabernacle Mission. Other church positions held included Sunday School superintendent and priesthood group leader. At the time of his death he was a high priest in the Brigham City Tenth Ward.

The following memorial was written by Eugene P. Watkins, the 1970 SUP National President

FRANCIS CHRISTENSEN, our late, beloved SUP president, as much as any member or official we have ever had, exemplified the lofty idealism of this worthy organization. It is tough to lose so devoted, enthusiastic, self-sacrificing and thoroughly capable associate.

SUP member will remember Francis especially for his refined and gentle manners. He was a scholar and a gentleman in all his dealings. To be a gentleman applies correct social and fraternal behavior, It is to have an attitude toward others which is based upon mutual respect. Bishop Christensen could show this respect without effort because he had the very rare talent of being able to get the other fellow’s point of view.

Courtesy was a marked characteristic of Francis Christensen. His constant thought was for the other person’s rights and feelings. He would never willingly cause worry or distress to others.

Reflection, which is both a power and a habit, same natural to Francis L. He had the ability to turn things over in his mind. In his administrative duties he seemed at times to be slow to make decisions, but he had to think things over. He never jumped at conclusions. In his educated mind he considered a new problem in the light of established ideas and decided how he should apply these principles to the situation at hand.

Bishop Christensen looked upon life and the world with an open mind. He never let prejudice or ill-feeling influence his actions which was quite impossible with him since he had no prejudices and never any ill-feelings.

Francis had the ability to translate thought into concise action. This is the power to achieve, to mold, to use the machinery of life efficiently.

His nobility of spirit, kindly, gentle charm and pleasing personality made Francis Christensen one in thousands — the ideal SUP member and official.

He did us all a lot of good and he will be missed for a long time to come.

(This biography was originally published in the May/June 1970 issue of Pioneer Magazine.)