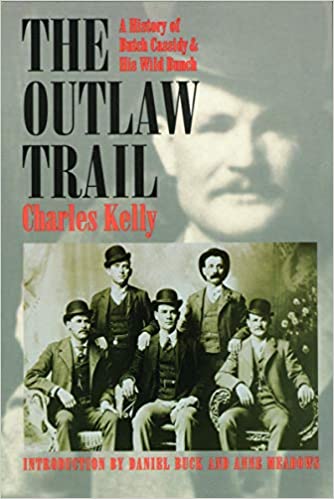 Students of western history are gradually coming around to appreciating the voluminous and fascinating works of Charles Kelly, prolific and versatile historian. The author of “Salt Desert Trails,” “Holy Murder,” “The Avenging Angels,” “Vigilantes of Montana,” “Mountain Meadow Massacre,” “Butch Cassidy And His Wild Bunch” and other stirring tales has made many great contributions to western history.

Kelly was born in 1889 in upper Michigan where his father held the pastorate of a community Baptist Church, until he was virtually starved out. His family moved to Ohio where Charley was reared. His father founded a religion of his own, and in order to perpetuate it bought a small print shop. Charley learned to set type at the age of seven and has been a printer ever since.

Charley takes it from here with his own story:

“That paragraph suggests two things: First, it explains “Holy Murder” and my unconcealed hatred of religious hypocrites like those among whom I was reared. Second, it explains why I am a printer, and that again explains “Salt Desert Trails.”

“Never being particularly crazy about the printing business, I started out to be a musician: but by the time the technique was mastered, along came radio and put most of us out of business. Being smitten with the colorful western country I took up painting as a hobby. Prowling the desert for subject material I accidentally stumbled onto the Donner Trail on the Salt Desert. No one here knew anything about it; so I began doing some research, out of curiosity, and found that historical research—especially in this section—was much more fascinating than either of the other two hobbies. Having compiled the story of the Salt Desert I wanted to have it preserved in book form, but no one was interested. So, being a printer, I published it myself, not as a typographic exhibit nor a piece of fine literature, but merely as a record.”

“Through that book I became acquainted with authors and historians all over the country, which made the effort very much worthwhile, even though it never made any money. I found there were a lot of untold stories in this part of the west, and decided to preserve some of them in permanent form, merely as a hobby.”

Herewith are presented a few more lines about this amazing writer as we published them in “The Pony Express,” February 1970 issue:

It is said that tears of appreciation rolled down his cheeks when honors were bestowed upon Kelly at Salt Lake City’s Alta Club last December. It was overdue recognition since Charley had pounded out lots of Mountain West history, especially about Utah, where many Mormons who crave truth, no matter where the chips may fall, admire him greatly.

The Salt Lake Tribune, once Pat Lannon’s, with C. C. Goodwin as editor, did itself credit to praise Charley in its December 28 columns. Here are some of the stories the veteran wrote for The Pony Express some 35 years ago:

Some Of His Books

Kelly will not be the richest celebrity in Utah’s cemetery when the sunset years of his life fades out, but what a wealth of history he has contributed for future generations! This is worth a thousand times more to a man’s name than the money in the bank.

We mentioned Col. Jackling: He was on The Pony Express staff for years, intimating to the writer many times how he loved western history and wished he had time to spend on it. He also liked mining and left $7 million for pursuit of research in metallurgy. The colonel got to be an authority on the bronze age. (At one time he was down in the world’s finest copper mines on the Island of Cyprus, thence to Cornwall’s tin mines that furnished the Phoenicians with alloy to make the world’s finest bronze).

Friends of Jackling, who contributed so much to Utah’s wealth, wanted him to enter politics and run for senator against George Sutherland in 1912. Some 58 years ago, Jackling and Sutherland met at the Alta Club where tears of appreciation rolled down George’s cheeks. It was a private conversation. Jackling had the money and owned the newspaper (Salt Lake Herald) to defeat Sutherland. When the noted mining engineer told the incumbent to run again and he and his paper would support him, tears of appreciation leaked from the senator’s eyes.

In this country of opportunity and freedom of enterprise, Utah’s former boy sheepherder worked his way through the University of Michigan Law School and went to the top by never lacking in appreciation.

Charley Kelly felt the same way about it in the same Alta Club 58 years later.