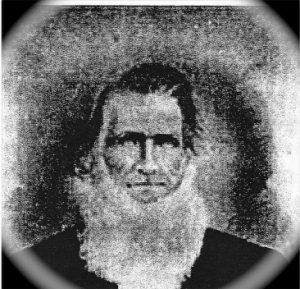 Just as the United States doubled in size through the Louisiana Purchase, David Jameson and Magdaline Miller added to that number by the birth of their son, Charles Jameson on 28 Apr, 1803 while living in Codorus, York County, Pennsylvania.

He and Mary Ann Hedrick were married on 12 Oct, 1823. Charles & Mary Ann were converted to the Church and baptized on 6 April, 1834. They were baptized by David Evans in Ohio.

“On one occasion, Elder Evans was preaching in Charles’ home town when a mob formed and were going to tar and feather him. At the close of the meeting ten men formed a line and marched to the schoolhouse to take Elder Evans prisoner. At this point, Charles stepped between Evans and the mob saying, ‘The first man that lays a hand on David Evans will have to walk over the body of Charles Jameson.’ The mob retreated.”

After being driven from their homes in Kirtland, the saints headed for Far West. They camped a short distance short of their journey’s end at a place called Haun’s Mill. It was winter and many were dying of exposure, starvation, and disease. Joseph Young’s narrative best describes what followed:

“On Sunday, twenty-eighth October, we arrived about twelve o’clock, at Haun’s Mills, where we found a number of our friends collected together, who were holding a council, and deliberating on the best course for them to pursue, to defend themselves against the mob, who were collecting in the neighborhood under the command of Colonel Jennings of Livingston county, and threatening them with house burning and killing. The decision of the council was that our friends there should place themselves in an attitude of self defense. Accordingly, about twenty-eight of our men armed themselves, and were in constant readiness for an attack of any small body of men that might come down upon them…

[On the 27th of October, Governor Boggs issued his infamous Exterminating Order which called for the extermination of all Mormons.] On Tuesday, the 30th, that bloody tragedy was acted, the scene of which I shall never forget. More than three-fourths of the day had passed in tranquility, as smiling as the preceding one. I think there was no individual of our company that was apprised of the sudden and awful fate that hung over our heads like an overwhelming torrent, which was to change the prospects, the feelings and the circumstances of about thirty families. The banks of shoal creek on either side teemed with children sporting and playing, while their mothers were engaged in domestic employments, and their fathers employed in guarding the mills and other property, while others were engaged in gathering in their crops for their winter consumption. The weather was very pleasant, the shone clear, all was tranquil, and no one expressed any apprehension of the awful crisis that was near us…even at our doors.

It was about four o’clock, while sitting in my cabin with my babe in my arms, and my wife standing by my side, the door being open, I cast my eyes on the opposite bank of Shoal Creek and saw a large company of armed men, on horses, directing their course towards the mills with all possible speed. As they advanced through the scattering trees that stood on the edge of the prairie they seemed to form themselves into a three square position, forming a vanguard in front.

At this moment, David Evans, seeing the superiority of their numbers, (there being two hundred and forty of them, according to their own account), swung his hat, and cried for peace. This not being heeded, they continued to advance, and their leader, Mr. Nehemiah Comstock, fired a gun, which was followed by a solemn pause of ten or twelve seconds, when, all at once, they discharged about one hundred rifles, aiming at a blacksmith shop into which our friends had fled for safety; and charged up to the shop, the cracks of which between the logs were sufficiently large to enable them to aim directly at the bodies of those who had there fled for refuge from the fire of their murderers.”

The carnage that followed was awful to behold. There were 17 killed, and many of those were mangled after their deaths. One man was cut up with a corn cutter, and a 9 year old boy was executed point blank by a mobster. Lucy Walker Smith explained what they saw after the killing was over. Warren Smith lay lifeless with his brains beaten out by the butt of a gun, and another of the same family with his thigh torn entirely away, and apparently mortally wounded. A little further on an aged man, Father McBride, lay weltering in his gore, being slashed with a scythe after being shot. The mob’s evil was indescribable, and they boasted of their deeds afterwards. To add insult to injury, after the carnage, the mob proceeded to ransack and pillage houses, wagons, and tents, taking bedding, clothing, and other essentials. This left the poor widows and orphans absolutely destitute!

Charles Jameson was one of the Haun’s Mill victims that survived.

“Oh, what a time that was! [Charles Jameson] was shot several times. He crawled into the brush. The men followed him. One said, ‘Shoot him.’ Another said, ‘No, let him suffer. He’s dying anyway.’ But he did not die; he lived to go to Utah and lived to a good old age.”

They were able to extract one bullet, but Charles carried the other three slugs with him for the rest of his life.

Though the details are not known, records indicate that Charles recovered by the time they arrived in Winter Quarters, then enlisted in the Mormon Battalion as a Private in Company E. He went with the company in 1846 to Santa Fe and on to San Diego, where he was discharged on 16 July, 1847 at Cuidad de los Angeles. When he arrived in Salt Lake City, he found that his family had not come west from Winter Quarters yet, so he returned there to find his suffering and destitute family. They began preparing for the trek west, but before they could leave, his wife died of cholera (in 1850). It was reported that she left 4 children behind when she died, but we have no record of how or when they died. It appears that Martha Ann, Agesee, David, Agnes, Margaret, and Susan must have died during the awful suffering that the saints went through, either before Winter Quarters, or at that place while waiting for their father to return to rescue them. What suffering! What strength! What faith!

The loss of so many of his family must have been even more devastating to Charles than the shooting at Haun’s Mill. We don’t have the details, but know that Charles pulled what remained of his family together and began making preparations for the journey to Salt Lake City. While yet at Winter Quarters, he married Nancy Stanley on 8 Aug, 1851. Finally, in 1853, he and his family joined a group of the Saints of Pottawattamie County and traveled to the Salt Lake Valley. They settled in Provo until 1871, then moved to Minersville, Beaver County, Utah, where he died on 20 Sep, 1886.