This article originally appeared in the Jan/Feb 1971 edition of Pioneer Magazine. 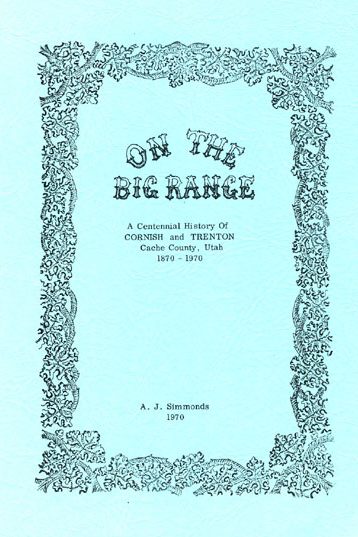 Cornish and Trenton (until 1907 one community) are virtually unique in rural Utah. They were initially settled as a series of cattle ranches; and until the hard winter of 1887-1888 wiped out the range cattle industry in northern Utah, the area was open range supporting several large outfits and smaller ranchers who subsisted on the profits of summer grazing of town herds from the farm communities in Cache County. The absence of easily diverted streams of water eliminated the possibility of irrigation until 1905 when a 25-mile long canal was built to bring the waters of Bear River onto the dry land.

Because Mormon settlement was so intimately tied to irrigation, LDS settlers by-passed the area; and it became a refuge for non-Mormons and Mormon apostates who found life safer away from the church-dominated villages of Territorial Utah. Though Mormon settlement did occur, lack of irrigation water and the exigencies of Homestead Act requirements, forced a scattered-farmstead settlement typical of rural Utah. As late as 1900, LDS Assistant Church Historian Andrew Jenson estimated that half the population in Cornish and Trenton was non-Mormon, a situation which made the area a center of support for the Edmunds-Tucker Act. Largely because of anti-Church feeling, in 1896 Trenton was one of only six precincts in Utah to vote against statehood for Utah and the home-rule it represented.

Boasting at various times a Congregational (New West) School, and Methodist and Presbyterian Churches, the area was a Cache Valley center for the Home Mission Movement.

The construction of the West Cache Canal in 1898-1905, the largest joint-stock canal in Utah, enabled the towns to shift from stock-raising and dry-farming to irrigated agriculture. The canal also lured a succession of land speculators who laid out a city in 1910 and sold hundreds of acres of newly platted apple orchards.

The book is divided into 16 chapters, has nine appendices, 8 maps, 10 pages of footnotes, and 125 bibliographic citations.