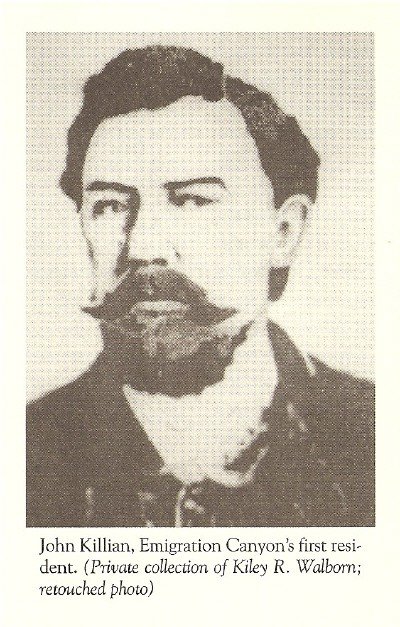 John Killian was born April 25, 1796 in Lincoln County, North Carolina. His father was Philip Killian and his mother was Mary Hoskings. Not much is known about John’s childhood. His family moved to Missouri after the War of 1812. They were among the first settlers there. Missouri became a territory in 1812 and a state in 1821. There, he met and courted a widow by the name of Lydia Ann Hopper Conley. Lydia was born October 11, 1795 in Burke County, North Carolina. Her parents were Thomas Hopper and Rebecca.

John married Lydia Hopper on August 25, 1818 in Howard County, Missouri. John and Lydia settled down in Lexington, Lafayette, Missouri and began raising a family. Lydia had three young daughters from her first marriage; Susan, Rebecca Emma and Mary Ann. John and Lydia had their first son, George Hamilton, on September 10, 1819. A second son, Thomas, was born on April 30, 1821. Their first daughter, Letha Jane, was born on October 11, 1822. Their next child was Nancy, born on April 17, 1824. Franklin was born the next year in 1825. At this time the Killian family made a small move and Almira Josephine was born in Perry County, Missouri on March 27, 1827. The last child, Jacob, was born in Caldwell County, Missouri on December 31, 1828.

While living in Caldwell County the family met oliver cowdery, who was one of the six original members of The Church of Jesus Christ of Latter-day Saints. John joined the Church in September 1831 and was baptized by Oliver.

John was called to serve a mission to Kentucky on August 7, 1834. His companion was Jesse Hitchcock, who later married one of Lydia’s sisters, Kisiah. Before he could leave for Kentucky, Lydia Ann passed away on October 18, 1834. The older children took care of the younger children so John could serve his mission. He served as a leader of the mission for several years.

John returned from his mission to what is now called Far West, Missouri. He was remarried on August 28, 1837 to Sarah (Sally) McClure. Sally was a cousin of his first wife, Lydia.

“The militia of the County of Caldwell were now all under requisition, armed and equipped according to law. The mob, after all the authority of the state had been recalled except from the force of Caldwell county, commenced the work of destruction in earnest, showing a determination to accomplish their object. Far West, where I resided, which was the shire town of Caldwell County, was placed under the charge of a captain by the name of John Killian, who made my house his headquarters.”

Things came to a head in November 1838 with the order for all members of the LDS Church to be expelled from the state of Missouri. It was in this harsh winter that they walked to Illinois with what little they had. For a time they found refuge in Quincy, Adams, Illinois. It was there that Sally gave birth to a daughter, Harriet Emma, on March 10, 1839.

The members of the Church soon found a new place to live. They called the city Nauvoo, which means beautiful. John and his family moved to an area across the Mississippi River from Nauvoo in the town of Montrose, Lee, Iowa.

John was a farmer by trade and an active member of the Church. He was an Elder in the Church and was called upon many occasions to help others. One such occasion is found in the Philo Dibble autobiography. He wrote the following:

“While living upon this farm, I was taken sick, Dr. (Frederick G.) Williams attended me, and after a while said he could do no more for me. I then called for the Elders to administer to me and Brother A. J Stewart, his brother, Levi (Stewart), and Brother (John) Killian were called in, but before they arrived, Mr. Robbins, of whom I rented the farm, called to see me. He declared that I might possibly live till three o’clock, but could not live till morning. When the Elders administered to me, Brother Killian being mouth, I was in bed. He poured the oil on my forehead and I jumped right out of bed and put on my clothes. On hearing that Robbins was going to Quincy in the morning, I walked up to his house, three-quarters of a mile, and went with him in his carriage to Quincy, remained all day and returned with him at night.”

John continued to serve as a captain in the nauvoo legion (a local militia). He also helped build the nauvoo temple and received his temple ordinances on December, 24 1845. He was also ordained a High Priest in the Church at this time.

Just as in Missouri, the local citizens started to find fault with the leaders and members of the LDS Church. John took an active part in protecting the leaders and members of the Church. In the book “A History of the Church” by B. H. Roberts, Joseph Smith in June of 1844 was giving some instructions to some members on where he would be staying to keep away from a mob. In these instructions he states:

“If you can ascertain by tomorrow morning that there is anything wrong, come over the river to Montrose, to the house of John Killien (Killian), and there you will learn where we are.”

A few days later a mob killed the Prophet Joseph Smith and his brother Hyrum while they were in a jail.

In 1846 the members of the Church were forced from their homes and fled west. They stopped around Council Bluffs, Iowa and made camp. They referred to the camp as Winter Quarters. Here many lived in tents or wagons until they could move west. Brigham Young, as the new leader of the LDS Church, had set his sights on the Salt Lake Valley. There they hoped to find a place to practice their religion in peace.

The first pioneer company reached the Salt Lake Valley in 1847. The trip from Winter Quarters to Salt Lake was over a thousand miles. John, his wife Sally, Letha Jane (now a widow), her two daughters and Harriett came across the plains in 1850. Because they did not travel with an organized wagon train, we do not have a record of their trip.

Jacob, his wife Susan and Franklin Killian were members of the Joel Edmund’s company in 1852. Their half-sister, Rebecca Emma Conley Tryon, and her family were also with this company. They are listed on the company records as follows:

We do not have any other record of when the other children came to Salt Lake.

After the members of the Church arrived in Salt Lake many were asked to colonize other locations. Many of John’s children took part in the colonization of Utah and the west.

George married Matilda Phoebe Cochran on July 19, 1853 in Clark County, Missouri. They went to what would later become the Concho area of Arizona. They had five children.

Letha Jane remarried in October 1850 to Elijah Newman. Elijah was an early member of the Church, like the Killians, and had experienced many of the same hardships in Missouri and Illinois. He was one of the original pioneers to come across the plains with Brigham Young’s first company. They moved to Parowan, Utah in 1851 and had seven children.

Nancy married Aquila Hopper, a second cousin to her mother, on July 13, 1848 in Lafayette County, Missouri. They were part of the original settlers of Salem, Utah. They had at least five children.

Franklin moved around and eventually ended up in San Bernardino, California. Some accounts say that he married a Spanish Indian lady by the name of Polonia Morongo.

Almira Josephine Killian married her cousin, Joseph Charles Killian, on 30 Mar 1845 in Perry County, Missouri. They stayed and raised their family in Missouri. They had 11 children with only four living to adulthood.

Jacob Killian and Susan Coons were married sometime between 1850 and 1852. They joined Nancy in settling Salem, Utah. They had at least seven children.

John stayed in Salt Lake. The pioneers had come to the mountains and had suffered many hardships; unfortunately all was not as well as the pioneers had hoped. War and strife continued to intrude itself in the Zion that the pioneers were trying to create. As the Nauvoo Legion had protected the Mormons in Nauvoo, Brigham Young was compelled to continue this protection in the Utah Territory. John, ever the Soldier, was elected a Captain of Company B of the Battalion of Silver Greys Infantry of the Salt Lake Military District. (The family has the original commission signed by Brigham Young in 1855) Part of his assignment was protecting Emigration Canyon. The ill-fated Donner Party had first used Emigration Canyon in 1846. It was also used as the final camp before Brigham Young’s company entered the Salt Lake Valley in 1847.

John and one of his militia commanders, Daniel H. Wells, worked as partners to protect the access and resources contained in the Canyon. A little later, Daniel H. Wells was given a grant to control the lumber being removed from the canyon. In his original grant the people of the Salt Lake Valley were to make arrangements with John Killman (Killian), his partner, to remove any lumber. John was later awarded a similar grant as Daniel and made the move to the Cottonwood Canyons. John built a large ranch in a small side canyon about five miles up the main canyon. This small canyon would soon come to be called Killian Canyon. The spelling of John’s last name was misspelled and the canyon is now called killyon canyon. The land John owned is now part of the Wasatch National Forest and thus is protected under federal law.

John died as a result of a logging accident in his beloved canyon and was buried there in November of 1858. He lived a great life, survived many trials and as his obituary said he lived and died