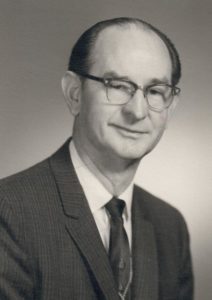 Mr. Oliver, who was born February 18, 1901 in Union, near Salt Lake City, Utah, earned his Bachelor’s and Master’s degrees at the University of Utah and shortly thereafter entered the teaching profession in the Business Department of Venice High School in Los Angeles.

In 1939 he became Thrift Chairman, which led to his appointment in 1947 as head supervisor of the Thrift, Conservation and School Savings Section of the Los Angeles City Elementary and High School Districts, in which position he served until his retirement in 1965. Under Mr. Oliver’s direction, Thrift and Conservation were firmly established as important activities in the Los Angeles City schools.

Mr. Oliver’s Church activities were many, including Stake Sunday School superintendency and Stake High Council, and he was for many years Treasurer, then President of the California Chapter, sons of utah pioneers.

He was also an active member of the Audubon Society, and treasurer for 20 years, then president of Gamma Rho Tau, professional business education fraternity.