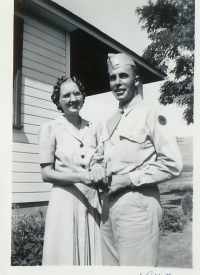 James Cooper Burns, 66, died May 14, 1980 in a Salt Lake City hospital. He was an active member of the south davis chapter of the Sons of the Utah Pioneers, serving as first vice president this year.

Born Oct. 24, 1913 in Bountiful to James Edward and Emma May Cooper Burns. Married Sarah Virginia Chi Christensen, April,9. 1941 in the Salt Lake LDS Temple. An active member of the LDS Church, he recently served an LDS mission with his wife in Lansing, Michigan.

Employed by the Veteran’s Administration for 35 years, he was a veteran of World War II.