by Wendell A. Bryce 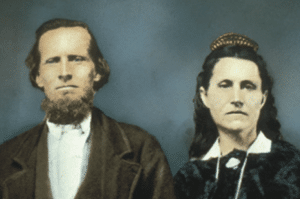 ebenezer bryce was born in Dunblane, Perthsire, scotland, on November 17, 1830. His parents were Andrew Bryce and Janet Adams. Ebenezer was the third child of eight children.

At 10 years Ebenezer began working in the shipyards. At 15 years he became an apprentice. In the spring of 1848 he became interested in The Church of Jesus Christ of Latter Day Saints. His father, family and friends did not share his enthusiasm. His father would lock up his clothes to keep him from attending the meetings. He was baptized in April and was determined to go to Utah. His father followed him on board a ship to persuade him not to go. but he was still intent on going.

Ebenezer came to the U.S. in the John Sharp Company arriving in New Orleans on October 27, 1848, aboard the “Erin’s Queen” from Liverpool with 232 souls. While in St. Louis he was ordained a Seventy on February 27, 1849. In March 1850 he started westward, traveling in the James Pace Company. They arrived in Salt Lake City September 16, 1850. No record of the company’s travels is known.

On April 16, 1854, he was married to mary ann park by George A. Smith in the Smith home. The new couple made their home in Salt Lake City where Ebenezer began working as a carpenter and millwright. He was soon asked to go to Tooele to work on a sawmill. In March 1856 Ebenezer was listed as a private in Company A of the Tooele Top Battalion of the nauvoo legion. The family moved to Spanish Fork, then Mill Creek.

At the October Conference in 1861 he heard his name read along with others to go to Dixie in southern Utah and help settle that area. This must have been a particularly trying time. They had four young children with the oldest about 6 years. Another child was expected very soon. They arrived in the present area of St. George in early December. The city consisted of 7 tents before their arrival. Then there were 40 days of rain! —while camped in a wagon with four young children and a baby. In the spring they were then called to go to Pine Valley about 30 miles to the north to build sawmills. There he and Sam Burgess erected the fourth sawmill in Pine Valley.

It was about 1865 when Bishop william snow asked him to design and be the builder for a Pine Valley Chapel. Ebenezer had not built any large buildings, but said, “If you will let me build it like a ship, I’ll build it.” He was told to go ahead.

They hand picked some trees from the gorge at the lower end of the valley on Santa Clara Creek. Because of the confines of the rock walls, the trees grew tall and straight. These trees were too large for the sawmills to cut, so they were squared into timbers with broad axes.

The sides of the church were built laying on the ground. To raise the sides into place, Ebenezer had a call that was used on ships. Ropes were attached to the sides and the call used to get everyone to pulling together to raise the sides. The building strongly shows his shipbuilding influence. Ebenezer said, “It might burn, it might float in a flood, it might tip over in a hurricane, but it will not break up.” The lower story was used as a school for many years and the upper story as the chapel. It is shown on aeronautical charts as a landmark to guide the aircraft pilots.

One of the little boys that went to school in the building would later develop the skip bombing technique that was used so successfully in World War II.

[Ebenezer was] advised to seek a warmer climate for Mary Ann’s health. [He] traded his home (which is still in use today) to Henry Slade for sheep and moved to the Paria River in Garfield County.

In developing water for home and irrigation, Ebenezer and two sons went up the creek until they found a series of springs. They set about cleaning these springs and developing more flow.

As they were working Ebenezer decided to go up the canyon further and explore. He was gone a long time, and when he returned he described the fantastic shapes and colors and said,

“Someday that will be a national park.”

[“A group of families established the town of Clifton near the junction of the Paria River and Henrieville Creek, in 1874. Ebenezer Bryce and his family arrived in Clifton in 1875, but soon moved upstream to Henderson Valley (New Clifton). Ebenezer helped to complete a seven mile irrigation ditch from Paria Creek. Bryce built a road into the pink cliffs to make timber more accessible. People started to call the amphitheater where the road terminated, ‘Bryce’s Canyon.’ Ebenezer Bryce and his family moved to Arizona in 1880, but the Bryce’s Canyon name stuck.”1

The family had moved about two miles north of Pima, Arizona, where the settlement of Bryce is named in his honor. It was there that he died, in 1913, and is buried in Bryce Cemetery.

Bryce Canyon became a National Monument in 1923 and a full-fledged National Park in 1928.2]

Written by Wendell A. Bryce, March 9, 1983, excerpts from the family history of Jerry and Barbara Waters Cornia at http://barbcornia.com/genealogy/ getperson.php?personID=I183&tree=barb