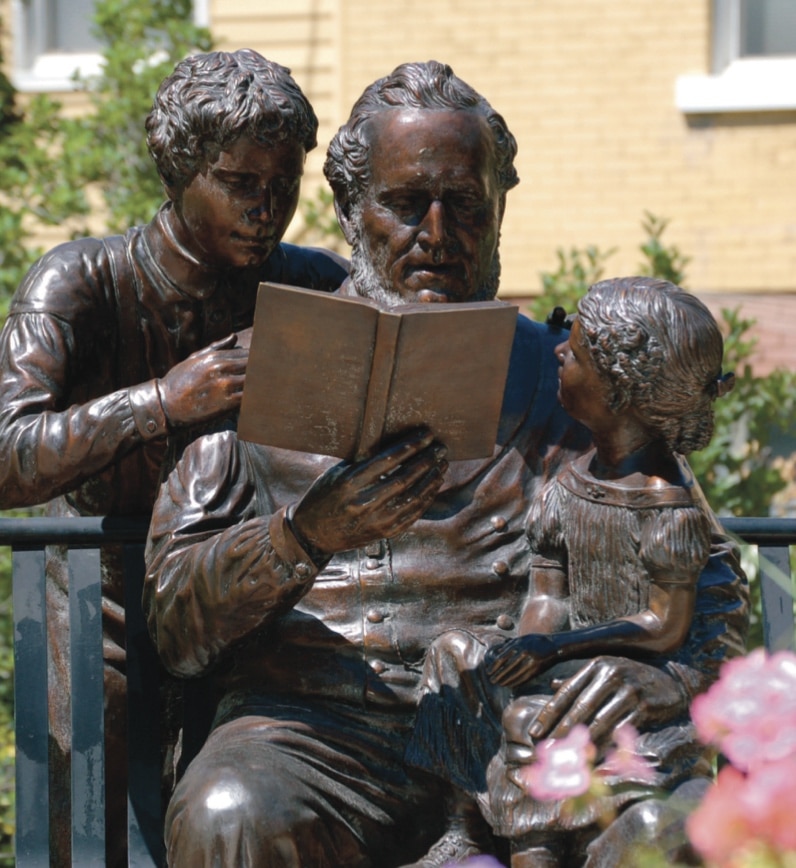 Precise rules regulated many aspects of life in the Lion House, including daily family prayer, school attendance, and Sabbath-day conduct. Mealtimes and the hours for arising and retiring followed a regular schedule. Card playing was strictly forbidden, as were “games of chance that encouraged or suggested gambling in any form.” Checkers and chess provided enjoyable entertainment but were not permitted on Sunday; neither were secular reading, secular music, and “roaming the hills.” The outer gates of the stone wall around the Lion House were locked each night at 10:00 pm. Children out later than that gained access to their quarters only through the office door and faced the prospect of being reported by the watchman.

Susa recalled that her father “could be very stern . . . and he maintained the utmost discipline in the family.” The only time she ever saw her father strike a child was when her baby sister became unruly during prayer time one evening. After the child twice disrupted the devotional by “running about. . . screaming with laughter,” Brigham interrupted his prayer, got up, caught her, spanked her lightly, laid her sobbing in her mother’s arms, then returned to his knees and finished the prayer.

He occasionally exercised a firm hand with the older children. One Sunday night during the courting years of the older girls, eight or ten couples had gathered in the parlor of the Lion House to enjoy each other’s company. To increase their sense of privacy, they had darkened the room somewhat by slightly turning down the lamp and stacking books around it. A short time later the door opened, and the stout figure of brigham young emerged. Setting his candle on the table, he unstacked the books and dismissed the girls to their rooms with the announcement that he would say good night to the boys.

Although strict rules and occasional stem measures were necessary to maintain order and stability in his home, Brigham Young did not rule with an iron hand. . . .

“If the Lord has placed me to be the head of a family, let me be so in all humility and patience, not as a tyrannical ruler, but as a faithful companion, an indulgent and affectionate father, a thoughtful and unassuming superior; let me be honored in my station through faithful diligence, and be fully capable, by the aid of God’s Spirit, of filling my office in a way to effect the salvation of all who are committed to my charge.”

“Kind looks, kind actions, kind words, and a lovely, holy deportment towards them, will bind our children to us with bands that cannot easily be broken; while abuse and unkindness will drive them from us, and break asunder every holy tie, that should bind them to us, and to the everlasting covenant in which we are all embraced. If my family, and my brethren and sisters, will not be obedient to me on the basis of kindness, and a commendable life before all men, and before the heavens, then farewell to all influence.”

“Kindness, love, and affection are the best rod to use upon the refractory…. I can pick out scores of men in this congregation who have driven their children from them by using the wooden rod. Where there is severity there is no affection or filial feeling in the hearts of either party; the children would rather be away from father than be with him.”

Using his own experience to illustrate, Brigham taught the Saints:

“My children are not afraid of my footfall; except in the case of their having done something wrong they are not afraid to approach me…. I could break the wills of my little children, and whip them to this, that, and the other, but this I do not do. Let the child have a mild training until it has judgment and sense to guide it.. .. It is necessary to try the faith of children as well as of grown people, but there are ways of doing so besides taking a club and knocking them down with it.. .. There is nothing consistent in abusing your wives and children.”

Brigham Young could counsel the Saints … on overcoming passsion and anger because he had largely conquered these passions himself. He suggested that the Saints put a piece of India rubber in their mouths when they became angry and bite it until they could get control of themselves:

“If you will keep your thoughts to yourself when you are angry they will not become the property of another.” He added, “Any person who is acquainted with me knows that I have Controll over myself. I do not speak in anger to my wives, children or the people. I make all my Passions be in subjection to the priesthood & the spirit of God.”

“There is not a father who feels more tenderly toward his offspring, and loves them better than I love this people, and my Father in heaven loves them; my heart yearns over them with all the emotions of tenderness, so that I could weep like a child; but I am careful to keep my tears to myself.”

Limited as he was in the time he could spend with his family, Brigham Young sought to make those occasions meaningful, quality experiences … [including] daily evening prayer, a ritual akin to family home evening for a later generation of Latter-day Saints. At about seven o’clock each evening, Brigham would ring the prayer bell to call his family to the large sitting room on the main floor in the Lion House.

“No matter what we were doing or who was there, we dropped everything” and assembled for prayer, wrote a daughter. In addition to prayer, events of the day were discussed, “golden words of wisdom” were uttered, plans made, family policies reviewed, and sometimes “there were juvenile troubles to settle, with father as judge of the Juvenile Court.”

Brigham found it necessary in 1866 to remind his family members of their daily obligation:

“There is no doubt but that my family, one and all, will acknowledge that my time is as precious to me as theirs is to them. When the time appointed for our family devotion and prayer comes, I am expected to be there; and no public business, no matter how important, has been able to influence me to forego the fulfillment of this sacred duty which I owe to you, to my self and my God.”

[However, Brigham] observed that at prayer time only a portion of his family might be present:

“My wives are absent visiting a sister, a neighbor, a mother or a relative; my children are scattered all over town, attending to this and that; and if at home, one is changing her dress, another her shoes, another getting ready to go to the theatre; another has gone to see Mary, and another to see Emily, and I may add, etc., etc., etc.”

He concluded with a “few words of counsel” that he expected his family to “receive kindly, and obey”: when prayer time came, everyone must be at home “ready to bow down before the Lord to make their acknowledgments to Him for His kindness and mercy and long-suffering towards us. … Your strict attendance . .. will give joy to the heart of your Husband and Father.”

Early one evening after the Church Historian called to see him, the President cut off the discussion and excused himself, remarking that “the hour for praying with his family had arrived.” Brigham Young commented that he “always thought it would be of great benefit to his family … if he set the example to pray punctually with them.” Another time, on a day when it was impossible for the Church leader to meet with his family at the appointed hour, he sent his son Brigham Jr. to the Lion House “to attend prayers for him.”

An eyewitness described the sense of urgency Brigham Young exhibited in the devotional hour. George A. Smith and his wife Bathsheba arrived at the Young home at prayer time. George A. reported that “after a very fervent prayer” Brigham addressed his family on the importance of living exemplary lives: “He said, the eyes of the world were upon them, also the eyes of the Saints. The influence of his teaching was affected by [his family’s] example.” He also urged his family to live the Word of Wisdom and his wives and daughters to be examples in their dress, and “as far as possible to manufacture what they wore.” When he finished, his wife Mary Ann followed with an “interesting address,” and George A. and Bathsheba Smith “bore testimony.”