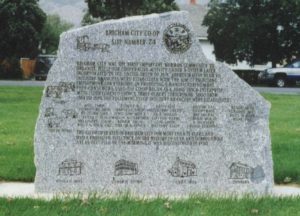 Built in 1890, the mercantile store was the last building constructed from the Brigham City Co-op. Three years after the store opened, a ﬁre destroyed the business, just a year before the cooperative organization closed. First Security Bank bought the building on July 29, 1942.