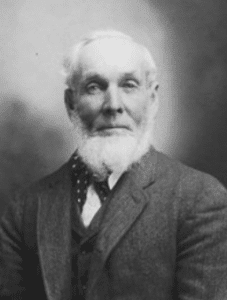 At their December meeting the south davis chapter eulogized the pioneer life of Thomas Briggs, which was presented by Bruce Briggs, a second great-grandson. Thomas Briggs emigrated to America in 1851. He made the six-week ocean journey from England to America arriving at the Port of New Orleans, then up the Mississippi River to St. Louis. Thomas finally arrived in Deseret and settled in Bountiful in 1862.

Thomas Briggs operated a lumber mill, farmed and was generally interested in community affairs. He served on the board of trustees for the local school. His interest in education was so deep that he set up a night school in a room in his home so that persons engaged or employed in daytime activity might further their education.

Thomas Briggs was a recognized peacemaker and over the years became successfully involved as an arbiter in problems between persons in the community.