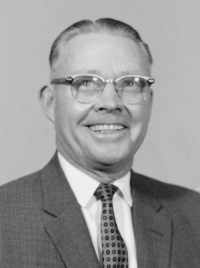 Kenneth A. Brady, 70, member of the temple quarry chapter of the sons of utah pioneers, died Sept. 6, at his home in Sandy, Utah, of a heart attack. He was patriarch of the Sandy East Stake, former state legislator and a retired educator.

For many years he was a teacher of manual and industrial arts and mathematics at jordan high school until his retirement in 1966. He was elected that same year to the Utah House of Representatives, District 22, in which he served two terms. He served as chairman of the House Agriculture and Irrigation Committee.

He served in a wide line of church offices: He was a missionary to Great Britain from 1923 to 1925; bishop of the Sandy Sixth Ward for six years; member of the High Council and the stake presidency for three years and was appointed stake president in 1965.

Mr. Brady graduated from Jordan High School in 1920. He received his B.S. degree from the University of Utah in geological engineering in 1928 and was a partner in the Brady-Milne Appliance Company from 1945 to 1955. He was charter president of the Union Lions Club.

Kenneth A. Brady was born March 16, 1901 at Sandy, a son of Lindsay Anderson and Ellen Catherine Anderson Brady. He married Jessie Madsen August 19, 1930 in the Salt Lake Temple.