by charles dickens, “The Uncommercial Traveler,” from The Works of Charles Dickens, Riverside Edition
(Cambridge: Riverside, 1873), 298-314. 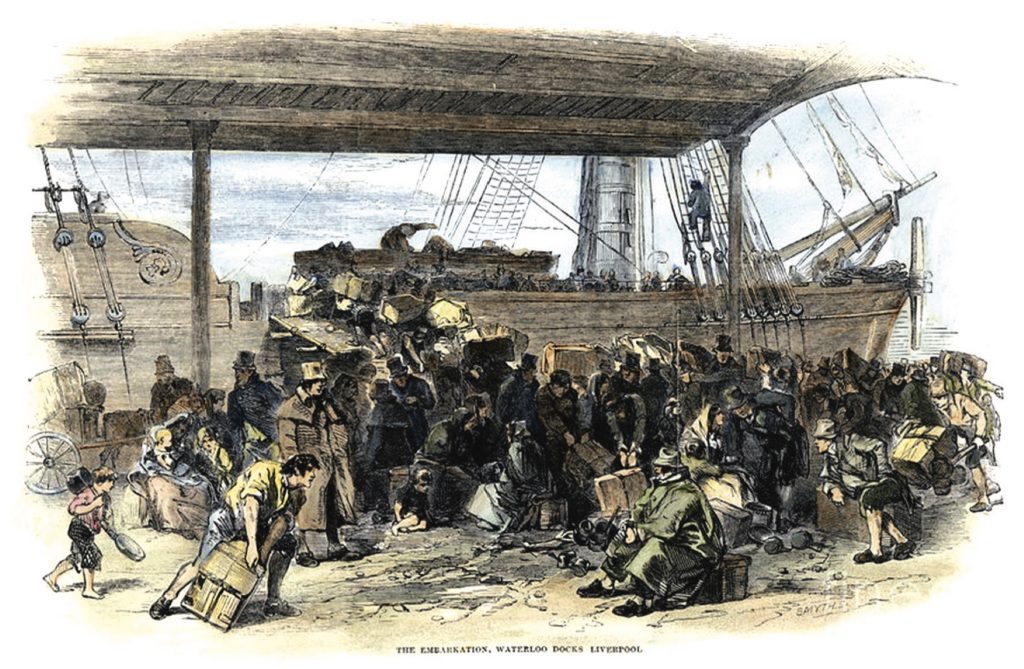 Behold me on my way to an Emigrant Ship, on a hot morning early in June… My Emigrant Ship lies broadside on to the wharf. Two great gangways made of spars and planks connect her with the wharf; and up and down these gangways, perpetually crowding to and fro and in and out, like ants, are the Emigrants who are going to sail in my Emigrant Ship. Some with cabbages, some with loaves of bread, some with cheese and butter, some with milk and beer, some with boxes, beds, and bundles, some with babies nearly all with children—nearly all with brand- new tin cans for their daily allowance of water, uncomfortably suggestive of a tin flavour in the drink. To and fro, up and down, aboard and ashore, swarming here and there and everywhere, my Emigrants. And still as the Dock-Gate swings upon its hinges, cabs appear, and carts appear, and vans appear, bringing more of my Emigrants.. . .

I go aboard my Emigrant Ship. I go first to the great cabin, and find it in the usual condition of a

Cabin at that pass But nobody is in an ill-temper, nobody is the worse for drink, nobody swears an oath or uses a coarse word, nobody appears depressed, nobody is weeping, and down upon the deck in every corner where it is possible to find a few square feet to kneel, crouch, or lie in, people, in every unsuitable attitude for writing, are writing letters.

Now, I have seen emigrant ships before this day in June. And these people are so strikingly different from all other people in like circumstances whom I have ever seen, that I wonder aloud, “What would a stranger suppose these emigrants to be!”

The vigilant, bright face of the weather- browned captain of the Amazon is at my shoulder, and he says, “What, indeed! The most of these came aboard yesterday evening. They came from various parts of England in small parties that had never seen one another before. Yet they had not been a couple of hours on board, when they established their own police, made their own regulations, and set their own watches at all the hatchways. Before nine o’clock, the ship was as orderly and as quiet as a man-of-war. . . .

“A stranger would be puzzled to guess the right name for these people, Mr. Uncommercial,” says the captain. … “If you hadn’t known, could you ever have supposed—?”

“How could I! I should have said they were in their degree, the pick and flower of England.”

“So should I,” says the captain.

“How many are they?”

Surely, an extraordinary people in their power of self-abstraction! … A boy with a bag of books in his hand and a slate under his arm, emerged from below, concentrated himself in my neighbourhood (espying a convenient skylight for his purpose), and went to work at a sum as if he were stone deaf. A father and mother and several young children, on the main deck below me, had formed a family circle close to the foot of the crowded restless gangway, where the children made a nest for themselves in a coil of rope, and the father and mother, she suckling the youngest, discussed family affairs as peaceably as if they were in perfect retirement. …

Eight hundred what? . . . EIGHT HUNDRED MORMONS. I, Uncommercial Traveller for the firm of Human Interest Brothers, had come aboard this Emigrant Ship to see what Eight hundred Latter- day Saints were like, and I found them (to the rout and overthrow of all my expectations) like what I now describe with scrupulous exactness.

The Mormon Agent [Elder George Q. Cannon, then presiding over the European Mission] who had been active in getting them together, and in making the contract with my friends the owners of the ship to take them as far as New York on their way to the Great Salt Lake, was pointed out to me. A compactly made handsome man in black, rather short, with rich brown hair and beard, and clear bright eyes. From his speech, I should set him down as American. Probably, a man who had “knocked about the world” pretty much. A man with a frank open manner, and unshrinking look; withal a man of great quickness. I believe he was wholly ignorant of my Uncommercial individuality, and consequently of my immense Uncommercial importance.

Uncommercial: These are a very fine set of people you have brought together here.

Mormon Agent: Yes, sir, they are a very fine set of people.

Uncommercial (looking about): Indeed, I think it would be difficult to find Eight hundred people together anywhere else, and find so much beauty and so much strength and capacity for work among them.

Mormon Agent (not looking about, but looking steadily at Uncommercial): I think so.—We sent out about a thousand more, yes’day, from Liverpool. . . .

Uncommercial: It is surprising to me that these people are all so cheery, and make so little of the immense distance before them.

Mormon Agent: Well, you see; many of ’em have friends out at Utah, and many of ’em look forward to meeting friends on the way.

Uncommercial: On the way?

Mormon Agent: This way ’tis. This ship lands ’em in New York City. Then they go on by rail right away beyond St. Louis, to that part of the Banks of the Missouri where they strike the Plains. There, waggons from the settlement meet ’em to bear ’em company on their journey ‘cross-twelve hundred miles about. Industrious people who come out to the settlement soon get waggons of their own, and so the friends of some of these will come down in their own waggons to meet ’em. They look forward to that, greatly. …

The emigrants were now all on deck…. By what successful means, a special aptitude for organisation had been infused into these people, I am, of course, unable to report. But I know that, even now, there was no disorder, hurry, or difficulty….

There were many worn faces bearing traces of patient poverty and hard work, and there was great steadiness of purpose and much undemonstrative self-respect among this class. A few young men were going singly. Several girls were going, two or three together. . . . Some single women of from thirty to forty, whom one might suppose to be embroiderers, or straw-bonnet-makers, were obviously going out in quest of husbands, as finer ladies go to India. . .

I should say (I had no means of ascertaining the fact) that most familiar kinds of handicraft trades were represented here. Farm-labourers, shepherds, and the like, had their full share of representation, but I doubt if they preponderated. It was interesting to see how the leading spirit in the family circle never failed to show itself, even in the simple process of answering to the names as they were called, and checking off the owners of the names. Sometimes it was the father, much oftener the mother, sometimes a quick little girl second or third in order of seniority. It seemed to occur for the first time to some heavy fathers, what large families they had; and their eyes rolled about, during the calling of the list, as if they half misdoubted some other family to have been smuggled into their own. . .

When all had “passed,” and the afternoon began to wear on, a black box became visible on deck. . . . This box contained a supply of hymn- books, neatly printed and got up, published at Liverpool, and also in London at the “Latter-Day Saints’ Book Depot, 30, Florence-street.” . . . The title ran: “Sacred Hymns and Spiritual Songs for the Church of Jesus Christ of Latter-Day Saints.”

. . . From this book … a hymn was sung, which did not attract any great amount of attention, and was supported by a rather select circle. But the choir in the boat was very popular and pleasant; and there was to have been a Band, only the Coronet was late in coming on board. In the course of the afternoon, a mother appeared from shore, in search of her daughter, “who had run away with the Mormons.” She received every assistance from the Inspector, but her daughter was not found to be on board. The saints did not seem to me, particularly interested in finding her. . . .

As the Amazon was to sail with the next tide, and as it would not be high water before two o’clock in the morning, I left her. . . .

I afterwards learned that a Despatch was sent home by the captain before he struck out into the wide Atlantic, highly extolling the behaviour of these Emigrants, and the perfect order and propriety of all their social arrangements. What is in store for the poor people on the shores of the Great Salt Lake, what happy delusions they are labouring under now, on what miserable blindness their eyes may be opened then, I do not pretend to say. But I went on board their ship to bear testimony against them if they deserved it, as I fully believed they would; to my great astonishment they did not deserve it; and my predispositions and tendencies must not affect me as an honest witness. I went over the Amazon’s side, feeling it impossible to deny that, so far, some remarkable influence had produced a remarkable result, which better-known influences have often missed.