The following biography was previously submitted to www.pioneerstories.com 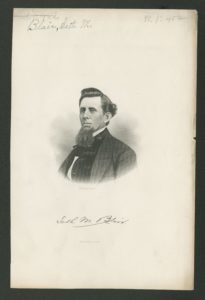 Seth was raised in tennessee along the banks of the Mississippi River with the sons of the legendary Davy Crockett. At seventeen he left to fight for the Republic of Texas where he was closely mentored in the art of war and law by Senator Sam Houston.

After his return to Tennessee, he married his first wife Cornelia Jane Espy and, with his father, moved to the Austin, Texas area. In 1848 Elder Preston Thomas was sent to Texas on a mission to visit former Apostle lyman wight, who had been excommunicated for apostasy. Unable to sway Wight back into the Church, Thomas decided to preach along the journey home.  He experienced some success, including finding Seth. Two weeks later Seth was baptized, immediately sold all of his possessions, and left to join the Saints in Council Bluffs, Iowa.

“After baptism I received a testimony of the Commandment to gather with the Saints in the Last days preparatory to the coming of the Son of Man the redeemer of man the only begotten of the Father upon which I immediately left my country my lands & my home the graves of my Father my Mother brothers & friends for the Gospels sake or for the sake of the Kingdom of righteousness organized by Jesus Christ upon the Earth in the last days that the promise made unto our Fathers Abraham Isaac & Jacob might be fulfilled.”

From winter quarters, the Blairs made their journey west to the Salt Lake Valley.

Having established a name for politics and law during his short time in Winter Quarters, Iowa (and some time in Washington DC), Blair was appointed Utah’s first US Territorial Attorney by President Millard Fillmore.  This appointment occurred just thirteen days after Seth’s arrival in the Valley. Through this appointment, Blair acted as prosecutor of Utah’s first murder trial. Blair lost to his partner and friend, defense attorney Elder George A. Smith of the Quorum of the Twelve Apostles.

Not long after entering into polyandry with a second wife, Harriett, Jane passed away from complications while giving birth to their eighth child. Seth recorded in his journal,

“She denied herself many comforts of life to add to my happiness of her I can say that her jealousy was ever dormant. She bore her griefs & sorrows at her own expense…”

Seth received two Patriarchal Blessings in his life. The first was in 1850 by Patriarch John Smith (brother of Joseph Smith Sr.), and includes the following:

“Thou shalt be blest and thy labors cause many to receive the truth. Kings, rulers, the wise, and the learned of this generation shall submit themselves unto thee and thou shalt lead them to Zion. No power on earth shall stay thine hand, thou shalt rebuke the waves of the sea, and like Enoch turn rivers of water out of their courses, cause streams to break forth in dry places to give drink to thy people, feed a multitude in the wilderness by the same power that Jesus fed the multitude when he was in the flesh, shall do every miracle that your heart desires, live to see Zion established in peace on the Earth.”

In 1853, Blair was asked to join the Salt Lake High Council, holding its #2 position.  That same year he opened Salt Lake City’s first hotel and named it the Salt Lake House. However, after only a few months, he closed it to serve a full-time mission to Texas. Blair taught the gospel to many of his former acquaintances including Rangers, attorneys, and politicians. At one time he debated eight preachers for four days, and even held his own in a few fistfights. By March of 1855, he was called as a Company Captain and led almost ninety converts back to Salt Lake City.  Unfortunately, a cholera outbreak killed a third of the group and left many in a fragile condition, including himself.

He soon took on two additional wives, which were only civil marriages.  They had already been sealed to a man that passed away and continued to maintain a separate home in Cache County away from the rest of the Blair clan.  Not long after he married his sixth wife. However, much to Blair’s sorrow, this also spurred his second wife Harriet into divorce.

In 1856 President Young received word of two stranded handcart companies in the Wyoming wilderness. Seth Blair was one of many courageous men to seek out and rescue these suffering Saints. The Willie Company’s journal notes his three supply wagons meeting up with them on November 4th at Bear River.

In 1857, then Major Blair of the Utah Nauvoo Legion took his command of 60 men and orchestrated the defense in Echo Canyon. During this time Blair wrote a letter to his old friend Sam Houston to help assist the defense of the Saints. Senator Houston immediately took the Senate floor. As a result, two “Peace Commissioners” were dispatched by President Buchanan to help settle the debacle.

Seth moved to Logan in 1860 and was called as a president of the High Priest Quorum, which gave him many opportunities to speak with resident Apostle Ezra T. Benson throughout the area. In 1864, Blair acted on President brigham young’s request to move to St. George. There he produced roughly 70 gallons of grape brandy a month in his distillery; formed the Dixie Oil Company to produce 1,400 – 2,000 gallons a year of castor oil for lubes, medicines, etc., as well as opening a mercantile store and a law office.

In 1866, Blair was called back to Salt Lake City to defend church leaders who had been accused of the murder of J. King Robinson.  Blair successfully defended Brigham and the others well and the case was dismissed.  He soon moved to Iron Town, located 21 miles west of Cedar City.  There he helped organize the Union Iron Works in 1870, which immediately began producing about 1 ton of cast iron per day.

At the end of his diary in March of 1875, we read an entry, likely by his daughter Ellen

“called upon to mourn the loss of one of the most affectionate kind & devoted fathers that has pleased God to give unto children.  After a lingering illness of nearly six months he departed this life…”

The Deseret News reports that he died of rheumatism and was interred in the Logan City Cemetery.

Virtues exhibited in this story: