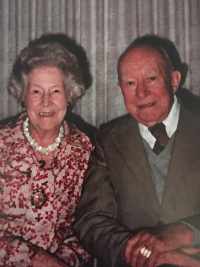 Le Grand and Edith Backman, active in Salt Lake City and Utah civic, fraternal, educational, cultural and religious leadership, were acclaimed SUP “Couple of 1970-71″ at the 1971 Logan SUP Encampment. Mr. Backman is former president of the salt lake city chapter of the Sons of the Utah Pioneers and a widely renowned leader in scores of community activities.

Mrs. Backman, native of Goshen, Utah is a member of the General Board of the International Women’s relief society and holds a Normal Training School degree from Brigham Young University. She has taught school in her home town and in Draper, Utah. The Backmans celebrated their Golden Wedding Anniversary on June 8, 1971.

Le Grand is senior member of the firm, Backman, Backman and Clark, attorneys at law.  He was admitted to the bar June 1, 1922, a graduate of the University of Utah. He served on a mission for the Church in South Africa from 1915 to 1919.

The highest of honors have come to Mr. Backman in the realm of education. He served as a member of the Salt Lake City Board of Education (1939-1959) and was chairman at termination of his term. He was director of the Days of ’47 celebration and has been a member of the Parade Committee since 1935. He was president of his SUP chapter during 1969-1970.

The Backmans have traveled extensively, circumnavigating the world twice with sojourns in Africa, New Zealand, the Orient, South America, the Caribbean, western Europe and Russia.